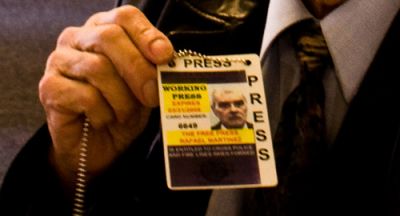 Internet-based journalists and bloggers are now eligible to receive press credentials from the New York Police Department. The new guidelines announced in early March state that a journalist, including online-only media workers, applying for press credentials must show that he or she covered at least six events that the city restricted access to. Before these rules were announced, online-only journalists routinely reported being denied press credentials because they were not from an established print publication.

“This is a press credentialing system for the online age that can serve as a model for governments around the country,” said Gabriel Taussig, the city’s Administrative Law Division chief, in a March 1 press release.

Press credentials are vital to journalists who need to cross police lines to cover a story or to be identified as a member of the press. In addition, two new categories of press passes were announced: “reserve cards” that allow news organizations to give reporters access to a specific assignment, and “single-event press cards” that grant credentials to journalists who pre-registered for a single event. The new categories eliminate what the city called “the chicken or the egg” problem for journalists who had not yet covered six events where there was restricted access.

“The new rules will enable journalists to gather and report news in a more successful manner than before,” said Norman Siegel, a leading civil rights attorney who participated in the revision process, in the March 1 press statement. “Online journalists will now be considered as 21st century journalists and be treated equally to print, television and radio journalists.”

But while online bloggers will now be able to more easily obtain credentials, NYPD will continue to issue them, something that has caused controversy in the past. Some argue that the NYPD should not be the department issuing press passes because of its involvement in contentious issues that make it a target for critical reporting, which may in turn cause the department to deny credentials to journalists they deem unfriendly.

The new rules for credentialing journalists are the culmination of a process that began in November 2008, when three New York City-based journalists whose work was primarily online filed a federal lawsuit after their applications for press passes were denied. The lawsuit, led by Siegel, argued that the city’s rules for issuing press credentials were unconstitutionally vague and resulted in unlawful interference with covering news.

In January 2009, the journalists who were plaintiffs in the lawsuit were awarded their previously denied press credentials.

“The media landscape is changing rapidly and New York City — with a nudge from three journalists and a team of top lawyers — grasped that fact,” said David Wallis, a plaintiff in the now-settled lawsuit whose application for press credentials was denied by the NYPD in 2007.

The old guidelines caused headaches for local publications like Gotham Gazette, a online-only outlet read by thousands daily. Gotham Gazette was denied access to an October 2009 mayoral debate because they did not hold police press credentials. In a November 2008 blog post, Courtney Gross, the publication’s city government editor wrote, “Since the summer of 2007, we have been denied a press identification card, which would assist us in accessing certain crowded/exclusive City Hall events. The NYPD’s reason: that we are online only, sans a tangible, ink-stained print publication.”

A public comment period on the new guidelines began March 2 and lasts until April 7, when a public hearing on the new rules will be held at NYPD headquarters, 1 Police Plaza, from 11 a.m. to 2 p.m.

Past articles in The Indypendent:
“A Win for Independent Media: NYPD Hands Over Previously Denied Press Credentials,” by Alex Kane. Published Jan. 10, 2009.