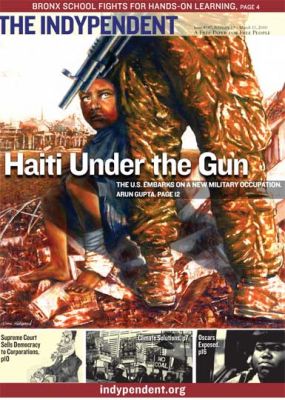 An excellent and informative article about what could be the defining issue over the next several years. The way it’s set up now, no matter who gets elected, corporations will win and the public will lose. Public Citizen is working to build a grassroots movement to fight the court’s ruling at dontgetrolled.org.
—Rick Claypool

AMERICAN NA’VI
Response to “With Avatar Poised to Win Big at the Oscars, James Cameron Should Help Some Na’vi Right Here on Earth,” IndyBlog Feb. 26:

Remember also to include the native folks of our very own North American continent in your call for fair dealings, the tribes who were squeezed off any land that might vaguely have some value. Americans (and I’m speaking of people in the United States) tend to conveniently forget the work they need to do right at home.
—T. Kurtheru McKenzie

AN OSCAR FOR POLITICS
Responses to “Political Films to Test Oscars: Will the Blue People Win,” Feb. 19:

What a dopey article. As a Black man, I found Precious to be highly racist and insulting. Who are the bad guys? All the Black men. Who saves Precious? Whites. I find it hilarious that you’re ragging on Avatar for being “White Guy Dances with Natives of Color and Saves Them” when that’s Precious — and you obviously are not very well connected to the Black community because that is a common theme of the Black criticism of that film. Avatar is an antiwar movie and so is The Hurt Locker. I’m really amazed at all the people who keep missing that point.
—James

I’m getting sick and tired of people slamming Avatar because the main character is a white male. It’s probably the most antiwar, pro-ecology film ever made by Hollywood. What is more radical than a white man giving up the rather dubious privilege of being white? Especially when he’s disabled?
—Gersan