Last August, Travis Bishop refused to serve in Afghanistan. Having filed for Conscientious Objector (CO) status, Bishop, based at Fort Hood, Texas, in the US Army’s 57th Expeditionary Signal Battalion, was court-martialed and sentenced to 12 months in a military brig. He was released from the brig today. 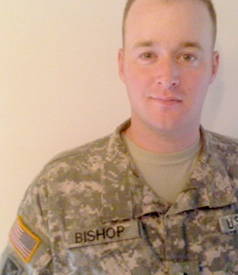 Bishop served his time in Northwest Joint Regional Correctional Facility at Fort Lewis, Washington. This military brig is notorious for being a particularly difficult jail to serve time.

While in the brig, Bishop was recognized by Amnesty International and received support from hundreds of people from around the world who wrote letters of encouragement to him and wrote letters to Lt. Gen. Robert Cone, the commanding general of Fort Hood, asking for Travis to be released from prison.

During his court-martial at Fort Hood last August, Bishop was tried by the military for his stand against an occupation he believes is “illegal.” He insisted that it would be unethical for him to deploy to support an occupation he opposed on both moral and legal grounds, thus his decision to file for CO status. A CO is someone who refuses to participate in combat based on religious or ethical grounds, and can be given an honorable discharge by the military.

In February, Bishop was granted a three-month reduction in his sentence by General Cone as a result of a successful clemency application.

In a letter to Truthout from prison, Bishop wrote this of his being granted clemency:

“Three months clemency. Wow. I am truly astonished. Great for me? Sure. Great for future resisters? Even more so. I cannot believe that I told the Army ‘No,’ refused to deploy, pleaded not guilty, and then indicted the entire system and blamed my command in court, and still merited clemency.”

Bishop’s case brings to light an important question for those serving in the US military today – that of the soldiers’ ability, while serving, to follow their conscience during a time of war.

This topic was the focus of a recent conference, Truth Commission on Conscience in War, that took place March 21-22 at the Riverside Church in New York City.

According to a press release about the event, “The March 21 public hearing will launch the Commission’s eight-month campaign to bring national attention to decisions of moral and religious conscience facing American service members, culminating with the Veterans Day release of the Commission’s Final Report.”

During his court-martial, Bishop told Truthout he was “opposed to all war,” based on his religious beliefs, that “as a real Christian, I must be opposed to all violence, no matter what, because that is what Jesus taught.”

The Truth Commission chair, Rev. Dr. Kaia Stern, who is also the director of the Pathways Home Project at the Charles Hamilton Houston Institute for Race and Justice at Harvard Law School, announced before the commission:

“The United States of America is founded on principals of political and religious freedom. When we punish the soldier who heeds his or her moral compass, our democracy is in grave danger.”

During the commission, Truthout spoke with Ian Slattery, who is a member of the planning committee for the commission, and is an associate producer of the nationally broadcast film “Soldiers of Conscience.”

“From our point of view, Travis’s story is indicative of something that is a broader issue, and that is that every service member has a conscience,” Slattery explained to Truthout, “The meeting we had this week in New York, and in the private meetings to follow, we looked at stories across the board that service members are experiencing. His story is like some of the other CO’s we’ve seen, who’ve had their claims denied or approved. These are folks who have chosen the harder road – to follow the call to conscience they’ve heard within themselves.”

According to Slattery, Bishop’s story is “a good example of service members’ consciences not being honored.”

One of the main points James Branum, Bishop’s civilian lawyer, made in defense of Bishop during his court-martial was that Bishop had never been given proper training that would have informed him of the CO option.

Branum explained to Truthout. “If an enlisted soldier isn’t informed that he has a right, then he effectively does not have that right. Just one to two days before he was set to deploy, in the midst of moral questions, he heard about CO status.

During his trial, Bishop’s defense called two witnesses to the stand, Pfc. Anthony Sadoski and Specialist Michael Kern, both of whom were active-duty soldiers at Fort Hood who said that they, too, had never been informed that filing for CO status was an option.

The judge in Bishop’s court-martial, Maj. Matthew McDonald, said that whether Bishop was notified or not about his right to file for CO status was not relevant to the case.

“If every soldier in the Army who disobeyed an order could claim it was because they weren’t notified of conscientious objector status, we probably wouldn’t have a military any more,” he added.

Branum told Truthout at the time that he felt Major McDonald was attempting to establish a precedent with the trial, regardless of the outcome. “We want to change the law, and I would argue that when soldiers are informed of their deployment, which is generally two to six months in advance, they should be giving training about CO status. I will argue that if you don’t do the training, you can’t deploy.”

Questions like this and others are what Slattery and others at the Truth Commission hope to bring to the national stage.

“With two conflicts in the last nine years, hundreds of thousands of service members have come home, and we’ve yet to bring matters of conscience to the table to talk about,” Slattery explained, “The commissioners that met on Monday at the church will be working together in the coming months to release a report on Veterans Day, that may include recommendations on policy and policy changes that will better protect the consciences of people like Travis and those to come in the future.”

In Bishop’s case, he had filed for CO status after his realization that he was morally opposed to all war. However, one of the issues of the Truth Commission was that of selective CO’s. “One of the ironies of the all-volunteer Army is that the only way we’ll recognize their conscience is if they are a CO … but Travis’s story teaches us that justice is a part of war, and when they attempt to exercise that conscience, they are only recognized if they are opposed to all war,” Slattery added. “We hope this will open up this possibility for people who come in the future like Travis. We want to bring all this into a discussion, and do so without being accused of being unpatriotic, but we owe it to service members to respect their conscience and their choices.”

The film Slattery helped produce, “Soldiers of Conscience,” was broadcast nationally on PBS in October 2008.

In the film, Camilo Mejia, a US Army veteran of Iraq who was the first service member to publicly refuse to return to Iraq, states what may well be the core spirit of the Truth Commission and CO’s like Bishop: “There’s no higher assertion of freedom than to follow your conscience.”

“The film has been critical to doing what we did at the Truth Commission,” Slattery told Truthout, “which is to bring together people to look at an issue considered as taboo, from different perspectives. But the film has facilitated this and been an important resource for folks to do this, those who are not antiwar with those who are, along with religious groups and other professionals.”

“In his Nobel acceptance speech, President Obama argued that nations will at times ‘find the use of force not only necessary but morally justified,’ We are asking: ‘What happens when service members are asked to fight in a war they believe is not morally justified?”

In January, VA Secretary Eric Shinseki confirmed that young male veterans are committing suicide at an increasing rate – losses that go uncounted as casualties of the current US wars. At the same time, new VA research on “moral injury” highlights the lasting moral and psychological harm of violating one’s sense of right and wrong in war.

It is this point the Truth Commission highlighted, along with the need to respect not just CO’s, but “selective conscientious objection.”

Rev. Herman Keizer Jr., the commission’s honorary host, is a retired Army chaplain, Vietnam veteran and former chair of the National Conference on Ministry to the Armed Forces. Keizer is also an outspoken leader in a growing movement for “selective conscientious objection,” the right to object morally to a particular war.

Meanwhile, Branum plans to force the issue with the military to at least have CO training better represented within the military.

Branum added, “If Travis goes to jail, he wants it to be for something. He wants it to count.” The attorney said he will continue to demand the Army provide CO training, “and my hope is that when troops are going to be deployed, they’ll be read their Bishop rights.”

In another letter from prison, Bishop wrote to Truthout about how he felt his story should inspire future war resisters.