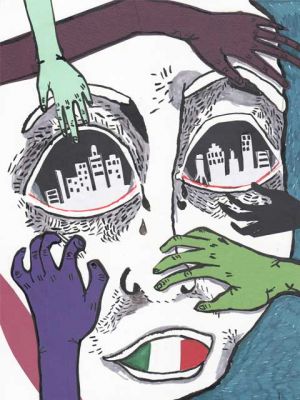 When I was living in Mexico nine years ago, I caught a glimpse of the deteriorating “perfect dictatorship.”

The ruling single party, the Institutional Revolutionary Party (PRI) was staggering as electoral losses mounted and the rightist Party of National Action (PAN) — embodied by the cowboy hat- and belt buckle-wearing former Coca- Cola boss, Vicente Fox — took the presidency. I was in Atlixco, Puebla (south of Mexico City), working with a group of maquiladora workers to organize an independent union in their garment factory and oust a corrupt charro (cowboy) union controlled by the PRI.

The monster is Mexico City (known in Spanish as D.F., for distrito federal), and El Monstruo: Dread and Redemption in Mexico City is a brief history of Mexico through the monster’s eyes written by Nation and La Jornada contributor John Ross. Much of it focusing on the time period from the Mexican Revolution thorough the early 2000s, Ross’ book is part people’s history, part Gonzo journalism, with a wry and humorous style describing both uplifting and demoralizing events. Of the North American Free Trade Agreement and the disparity in wealth between the Mexican and U.S. economies, Ross writes, “the idea of getting hitched to an economy 25 times the size of Mexico’s seemed as perverse as letting a 10-ton American gorilla have its way with a skeletal Mexican burro.”

While not exhaustive, at some 400 pages El Monstruo is neither feathery nor Lonely Planet glib.

The Mexican Revolution was not kind to el monstruo, as Zapata and Villa shared an open disdain for and violent hostility to the city’s environs and inhabitants, known as chilangos. Villa sacked parts of the city, and Zapata hated the capital because of the amassed political and economic power that disenfranchised his peasant-indigenous base. While it may be difficult for casual readers of Mexican history to follow the internecine death matches of the revolution, Ross makes it worth the read.

Ross’s best chapters detail the depravity and rot that is the PRI. For most of the 20th century, the PRI dominated Mexican politics with an iron fist. Termed the “perfect dictatorship” by rightist Peruvian writer Mario Vargas Llosa, the party controlled every aspect of society from farmer’s groups, street vendors and unions to who got a piece of garbage disposal. Past PRI leaders were notorious for their greed and barbarity, and Ross’s writing revels in the political assassinations.

The PRI’s ruthlessness is recorded in Ross’s passages about the Oct. 2, 1968, Tlatelolco massacre of university students before the Mexico City Olympics. Like in Paris and New York, leftist students rebelled in revolutionary fervor against the establishment. Ross recounts the buildup to the student killings when 10,000 troops swept university buildings, arresting 557 students, and tells the remarkable story of an Uruguayan poet who holed up in a bathroom stall for three weeks, eating toilet paper to escape sure imprisonment and torture (the scene also appears in The Savage Detectives by Chilean writer Roberto Bolaño).

Ross underscores the earthquake of Sept. 19, 1985, which destroyed large swaths of D.F. and killed at least 10,000, with another anecdote about the PRI’s murderousness. Government workers entered “the ruins of the Mexico City prosecutor’s office to retrieve files and typewriters, [and] they found six bodies stuffed into the trunk of an agent’s car.” The bodies, covered in cigarette burns, were reputedly Colombian drug dealers.

At this point in Mexican history it was not surprising that the PRI murdered its enemies and dealt drugs — according to Ross the largest drug dealers were the D.F. police. I was nonetheless disappointed that Ross did not mention Indymedia journalist Brad Will’s death in Oaxaca at the hands of PRI-linked police officers in 2006.

When I worked on the union campaign in Puebla, the rot of the PRI-controlled charro union manifested itself literally. The union got the factory to contract lunch services to a PRI-connected caterer that gouged the owners and fed the workers putrid, worm-infested meals. On certain days large sections of the workforce went home with dysentery, which prompted a wildcat strike. The PRI-controlled state government got its revenge on the largely young female workforce by sending the riot police to kick some teenage girl ass. When I arrived representing United Students Against Sweatshops, PRI lackeys took to the airwaves and claimed we were in town to disrupt the government and steal back Mexican jobs to the United States. Workers eventually organized the first independent maquiladora garment union in Mexican history.

Ross ends the book with the travesty of leftist presidential candidate Andres Manuel Lopez Obrador’s “loss” to the current rightwing PAN president in 2006. I was expecting a more robust investigation into the metrics of the electoral fraud by the PAN, but ended with the feeling that the PAN is taking on old PRI tactics.