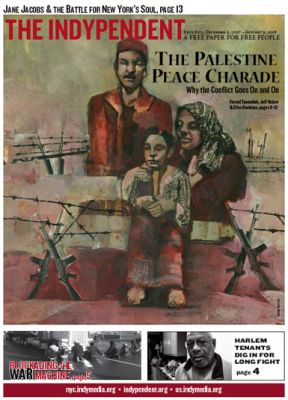 The endless “Palestine peace charade,” as we here at the Indypendent termed it in December 2007, has returned to the forefront of discussions about Israel/Palestine.

Vice President Joe Biden arrived in Israel yesterday, meeting with Israeli leaders as he said that ties between Israel and the United States were “unshakeable.”

Biden’s visit coincides with the announcement of “proximity talks” between the Palestinian Authority and the Israeli government, which will see the Obama administration’s Middle East peace envoy George Mitchell shuttle back and forth between the two sides.  The indirect talks are the first since the brutal Gaza onslaught of 2008-2009.

Palestinians will not meet directly with Israel as long as Israel continues building illegal Jewish-only settlements on occupied Palestinian land, which is in direct violation of numerous United Nations resolutions and the Geneva Conventions  Biden is in Israel to primarily discuss Iran’s nuclear program, according to Palestinian politician Dr. Hanan Ashrawi, who told Al Jazeera that, “the peace effort seems to me is not a primary issue on the agenda.”

But for Mitchell, the so-called “peace process” is his territory.  However, what we can be sure of is that the spectacle of indirect talks for four months won’t mean anything and will not advance justice for the occupied Palestinian people, and will result in another failure by Mitchell and the Obama administration to stand up to the illegality of Israeli moves.

These latest round of talks are the continuation of a process that began in the early 1990s, when, most prominently, the Oslo Accords were signed.  During the Oslo years leading up to the Second Intifada in 2000, “the number of settlers illegally living on Palestinian land had risen…from 80,000 to 150,000—even though the Israelis, as well as the Palestinians, were forbidden take ‘unilateral steps’ under the terms of the agreement,” as the journalist Robert Fisk writes in his book The Great War for Civilization.

Currently, there are 500,000 Jewish colonizers on occupied Palestinian land, including in East Jerusalem, which is supposed to be the future capital of a Palestinian state.

“Negotiating over how to divide a pie while the Israeli side is busy devouring it via annexation and settlement is an exercise in futility,” said Rashid Khalidi, the Edward Said Professor of Arab Studies at Columbia University and a former adviser to Palestinian negotiators.  “There is no reason to expect a better outcome from these negotiations between the most intransigent Israeli government ever and a weak and divided Palestinian leadership.”

Israel has already spit in the face of the Palestinians, even before the indirect talks get off the ground.

Yesterday, as Biden arrived in the region, Defense Minister Ehud Barak approved the construction of 112 apartment units in an ultra-Orthodox settlement in the West Bank for “safety issues.”  The State Department barely flinched, and spokesman P.J. Crowley claimed that the move did not violate a previously announced “settlement freeze,” although there was no mention of the illegality of the settlements.  Crowley instead urged both sides to be “cautious.”

And today, in an even more provocative move, Israel’s Interior Ministry approved the construction of 1,600 new homes in Arab East Jerusalem, enraging the Palestinian.  The Palestinian Authority said, “Israel’s decision to approve new East Jerusalem houses effectively prevents any peace negotiations from taking place,” Haaretz reported this morning.  Recently, East Jerusalem has been the site of more ethnic cleansing of Palestinians in the Sheikh Jarrah neighborhood, where Palestinians have been kicked out of their homes to be replaced by Jewish settlers.

While the settlements and the illegal separation barrier continue to cut and carve up Palestinian land, the two-state solution has gone to the wayside, despite rhetoric from the Obama administration.  The only question is when the struggle will shift towards an anti-apartheid, one person, one vote movement of Palestinians.

“These proximity talks are a charade to cover up the complete failure of Obama’s peace strategy to date and the weakness of the US-backed Palestinian Authority leaders. Talks are meaningless while Israel is engaged in full-speed colonization of East Jerusalem and the West Bank – despite a so-called ‘freeze’ – and even more so without the participation of Hamas,” said Ali Abunimah, the co-founder of Electronic Intifada.

Special thanks to the Institute for Middle East Understanding for providing the above quotes by Rashid Khalidi and Ali Abunimah for publication.