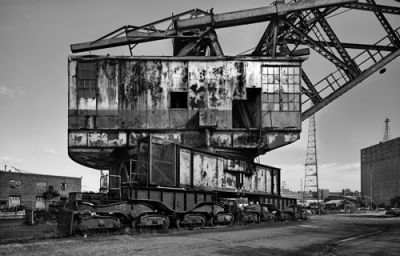 Think the city isn’t what it used to be? This spring, several venues around the city ask you to consider the question.

The Museum of African Diasporan Art opened an ambitious new show in February called Gentrification: The Pink Elephant Speaks. This 20-artist exhibit, curated by native Brooklynite Dexter Wimberly, sets out to be a “conversation” rather than a definitive analysis.

About 40 pieces are featured, in media ranging from video to sculpture to modified New Yorker cartoons. The photographs and abstract pieces resonate the most. Many speak without their captions, like one of an abandoned couch by the Sunset Park waterfront. In another corner, artist Sarah Nelson Wright shows abstract maps charting relocations to, from, and through Brooklyn of subjects she interviewed — think sharp, jolting lines alongside lists of reasons you’ll recognize. There’s a futuristic pod in the back into which visitors are encouraged to drop their wishes for a future Brooklyn.

The show also includes short research projects and photos from some Brooklyn high schools, which add a thought-provoking touch (although they could benefit from more context).

It was striking that the exhibit spurred a public conversation among a handful of attendees. Near the entrance, an older man discussed the value of housing as a right or as a commodity, before the talk quickly moved to healthcare. Say what you will about the unlikeliness of the museum as a conversation starter — on one day, at least, it seemed to be working.

Set up to run until May 16, the show includes free or low-cost events such as a film screening, a small business owners’ workshop and the requisite roundtable discussion. 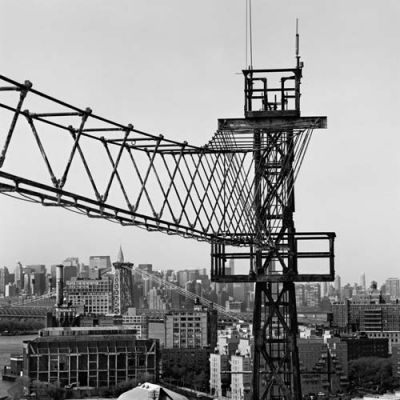 A few degrees north, Brooklyn’s abandoned industrial waterfront is getting a party in the deindustrialized neighborhood next door. Photographer John Bartelstone has a long and varied history with the city’s buildings. An architect by trade, he spent 10 years at the Port Authority of New York and New Jersey, then moved on to photography. His form is aerial photography, spending more time flying in a helicopter with a camera than any human being has a right to. His 15 years spent photographing the Brooklyn Navy Yard make their way to us in a book, and a concurrent show at Powerhouse Books in Dumbo, going up March 18.

The work is tightly focused and magnificent — carefully constructed black-and-white photos, mostly large format, which sneak you into vast spaces that seem unimaginable. Stately and complex (you can’t tell what most of the machines were used for) the black-and-white photos occupy a strange space in time. They feature a style often associated with 19th-century documentary combined with a sleekness reminiscent of IKEA, and breathtaking detail of contemporary large-format cameras.

Catch John at the March 24 launch party (and ask him about the disappearance of quality cookies from New York) or at Columbia University April 22. For the easily bored, the Navy Yard itself is just a few blocks out (fair warning: when I tried to go over in 2004, the cops weren’t having it. Check out my longer interview with John). 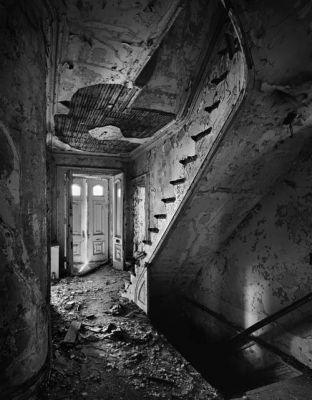 Finally, across the East River at Exit Art, the waterfront is explored in a show called Waterpod: Autonomy and Ecology, through April 10. The waterpod in question is a barge that traveled around the city’s shores last summer, loaded with equipment to generate power, grow and cook food and dispose of waste — a vessel intended to be completely self-sustaining.

For such a utopian-sounding endeavor, the Waterpod had a bleaker genesis. Artist Mary Mattingly told The New York Times that she wanted to explore an alternative future lifestyle in which “our resources on land grow scarcer and sea levels rise.”

The show is composed of videos, photographs and journal entries that chronicle the Waterpod’s journey around the five boroughs and the impact it had on the crew and visitors. If you didn’t get a chance to see the pod last summer — here’s a great second look. 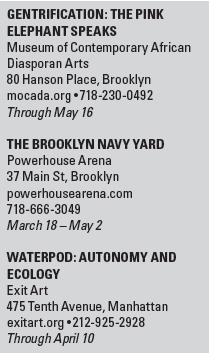