The four students from Florida — Felipe Matos, Gaby Pacheco, Carlos Roa and Juan Rodriguez — are walking 1,500 miles from Miami, Fl. to Washington, D.C., in a five-month campaign named “Trail of Dreams” to raise attention about the current immigrant condition and to pressure President Barack Obama and Congress to take up comprehensive immigration reform.

The students were not detained by the sheriff’s office. If the students had been arrested, they could have faced deportation.

Conway has been a vocal proponent of “287(G),” a federal prevision authorizing local law enforcement to enforce federal immigration laws.  The Trail of Dreams says that this policy has resulted in the deportation of hundreds of immigrants from Gwinnett County in just the past three months — policies that the student walkers say are oppressive and discriminatory.

“We’re not scared of Sheriff Conway,” said Rodriquez, 20, in a March 2 press release. “Local enforcement of federal policies like the one Sheriff Conway is proudly implementing are proof of the need for real immigration reform. These policies have the long-term effect of criminalizing immigrants — the vast majority of whom are here only to work hard and provide for their families.” 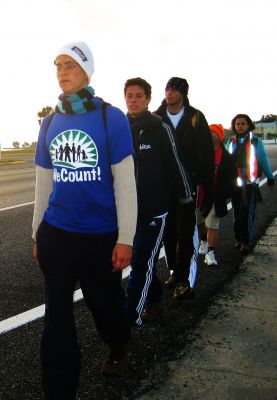 PHOTO: Four immigrant college students are trekking 1,500 miles in a five-month campaign from Miami to Washington, D.C., to rally in support of “education, not deportation” for undocumented youth and their families. COURTESY: EVA GRAY

For nine years, The Indypendent has printed truth in the face of power. With political and economic systems faltering, there is an opportunity for real change from the bottom up. But this means having a vibrant independent media. Consider supporting The Indypendent as a monthly sustainer, donating as little as $10 a month. Please visit indypendent.org/donate.