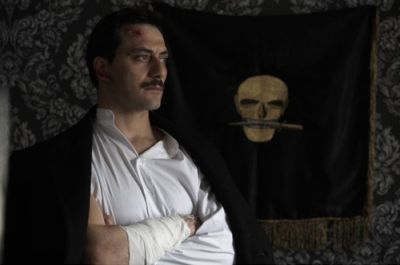 “Mussolini Killed in Northern Italy!” trumpeted the April 30, 1945, New York Times, adding, in a sub-headline, “Mistress Killed with Him.” Buried in the story was a brief mention of “his wife, Rachele.” There was no mention of any other wife.

It’s now widely accepted, however, that the Italian dictator had married another woman, Ida Dalser, before he made Rachele Guidi his wife; that he was still married to Dalser when he married Guidi in 1915; and that once he rose to power, Mussolini made every effort to destroy any evidence of his first marriage. Now, pre-eminent Italian filmmaker Marco Bellocchio (Fists in the Pocket; China Is Near; Good Morning Night) has crafted the scandal of Mussolini’s first, hidden marriage into Vincere (To Win), a gripping political thriller that draws provocative parallels between the rise of Italian fascism under Mussolini and the career of Italy’s present-day prime minister, right-wing politician Silvio Berlusconi.

Vincere holds up on its historical tale alone, though, thanks largely to the outstanding performance of Giovanna Mezzogiorno as Ida Dalser, Mussolini’s abandoned first wife. From the moment in 1907 when she first sets eyes on the young socialist journalist—Mussolini was a socialist before he almost single-handedly created Italian fascism—Ida is in thrall to his political force and personal charisma. Watching him prove to a large audience that “there is no God” by challenging the God-that-isn’t to strike him dead arouses such a passion in Ida that she to brings him home to bed. When he is later expelled from the socialist party for advocating Italian entry into World War I, she sells everything she owns to finance his new pro-war and anti-“foreigner” journal. And when she becomes pregnant, Ida marries him, unaware that he has another lover, Rachele Guidi, with whom he has already had one child. 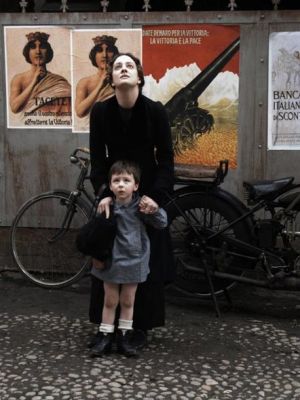 In the end, the future Duce chooses the less-political and less anti-clerical Rachele, abandoning Ida along with her newborn son, Benito Albino Mussolini. As his career skyrockets and he foresees the need to placate the powerful Catholic Church, he marries Rachele in proper bourgeois style (albeit bigamously). Ida demands that he acknowledge and support her and Benito, and her refusal to disappear becomes a constant threat to Mussolini’s burgeoning leadership in the fascist movement. Once he becomes Italy’s prime minister in 1922, Mussolini persecutes Ida, eventually confining her to a series of mental hospitals. Neither she nor Benito lived to see Mussolini fall.

Vincere’s historical saga is tightly laced with references to Berlusconi and the right-wing coalition governing Italy today. Like Mussolini’s racist and xenophobic fascists, Berlusconi’s Northern League allies have notoriously attacked Italy’s gypsies. Bellocchio indicts the major players, in particular the Vatican (with which Mussolini, bitterly anti-clerical in his youth, later makes his politically motivated reconciliation). In a recent interview, Bellocchio said, “Mussolini was the first to establish a regime based on images.” Here, the director himself uses images from the period to bridge historical and contemporary politics; archival footage of the real Mussolini and scenes from movies of the day make the past vividly present. (In one scene, Ida sits in a theater watching Charlie Chaplin’s The Kid, a tear-jerker tale of an abandoned child.) The conception of politics as image manipulation should make Vincere that much more compelling to an American audience.

But it’s the consciousness of audiences in Italy and beyond that seems to have been Bellocchio’s primary target. As journalist and left historian Ethan Young commented after the screening, “Fascism is still part of Italy’s national identity. Forgetting isn’t acceptable.”

Vincere is currently screening at IFC. See IFCfilms.com for listings.