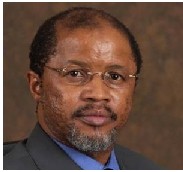 Accolades for the 53-year old Deputy Health Minister poured in all week. Frans Baleni of the National Union of Mineworkers noted that Sefularo had “been a hope for many hopeless, poor and marginalized South Africans… particularly as champion of the National Health Insurance which stands to benefit many poor South Africans.”

ANC Chief Whip Mathole Motshekga agreed the country has been robbed of a dynamic and talented leader with a passion for social justice and a deep care for the poor. The Inkatha Freedom Party expressed its condolences, saying Sefularo’s death had left the country poorer.

Sefularo held diplomas in tropical medicine, public health and health service management from the university and had lectured in the department of community health.

Sefularo leaves a wife and 3 daughters, Bonolo, Masechaba and Ipelang, and one son, Chere.

Apr. 6 – The leader of a notorious far-right separatist movement was killed this week, over his alleged failure to pay two farm workers he employed since December.

Eugene Terreblanche, 69, was found Saturday, bludgeoned to death at his farm house in North West province. A 28-year-old farm laborer and 15-year-old casual worker were charged with theft, unlawful entry, and killing Terreblanche. Reports from the scene say he had refused to pay them their monthly pay of $41.

President Jacob Zuma remarked: “We strongly condemn such acts of violence. People should use legal and peaceful means to resolve differences of any nature including labor disputes. We should uphold the right to life that is enshrined in the Constitution and abide by the rule of law at all times.”

A farmer from the southern Free State immediately replaced the deceased leader of the “White Wolves” (Afrikaner Weerstandsbeweging) with a following reported to be 150,000. The AWB, formed in 1973, is ruled by an executive council – of which Terre’Blanche was the chairperson.

The incident shocked the nation and provoked at least one heated confrontation reminiscent of the days of racial apartheid. At a court hearing for the two suspects, white supporters of the dead AWB leader and South African Blacks traded insults and sang racially-charged songs with the AWB singing Die Stem, the national anthem before the dawn of multiracial democracy in 1994. Black spectators responded with Zulu choruses from the new national anthem, Nkosi Sikelel’ iAfrika.

The trial will be closed to the public. A new hearing was set for Apr. 14.

Apr. 6 – Former U.N. chief Kofi Annan announced that his Global Humanitarian Forum, dedicated to addressing climate change, will close due to a lack of financial support. 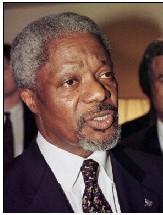 The Ghanaian diplomat who sits on many boards including the United Nations Foundation, heads the Panel of Eminent African Personalities which addressed civil unrest in Kenya, and is chancellor of the University of Ghana, among many other posts and citations, acknowledged that the organization he founded in 2007 was unable to raise enough cash to stay afloat.

“It is a great disappointment to all of us that this promising project had to end this way,” Annan said. Its most concrete project was to install weather data collectors on mobile phone towers in Africa to provide better climate data to impoverished communities.

Annan singled out Switzerland for creating the forum and then failing to provide enough support to keep it alive.

RWANDAN DIPLOMAT DURING GENOCIDE ALIVE AND WELL IN ALABAMA

Apr. 6 – A former ambassador to the U.N. during the horrific days of the Rwandan was discovered living quietly in Alabama working in a plastics factory.

Jean Damascene Bizimana, the country’s 36-year-old ambassador in the spring of 1994 when close to a million people were killed in a so-called ethnic war, defended the regime while in his U.N. post and opposed an arms embargo which all other members of the Security Council endorsed.

Bizimana assured the world’s diplomats that his government was not to blame as over 800,000 people were massacred. Then he vanished and remade his life in middle-class America according to research by American University Prof. David L. Bosco in a Washington Post article.

He “never showed the slightest sign of remorse about what was going on in his country,” Bosco said he was told by former British ambassador David Hannay. He is a “genocide denier” whose possible involvement in events against the Tutsi is still being investigated, said the current Justice Minister and Attorney-General, Tharcisse Karugarama.

Bizimana is an American citizen now, Bosco found out. “He works for a plastics company. And he doesn’t want to talk about genocide.” It is likely that he received citizenship as an exile who would be arrested if he returned home.

Rwandan officials were not the only ones who opposed international action during the deadly killing years. Then Secretary of State Warren Christopher, former President Bill Clinton and U.S. Ambassador Madeleine Albright also opposed a peacekeeping mission.

Africa News Briefs are published by the Global Information Network.