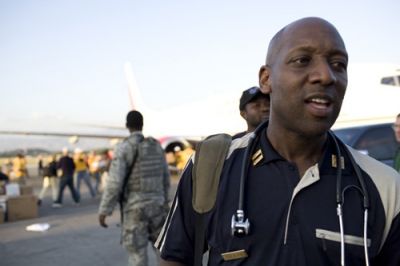 Within 48 hours after the Jan. 12 earthquake hit Haiti, the Bedford-Stuyvesant Volunteer Ambulance Corp had already gathered $30,000 worth of supplies and registered 200 volunteers to travel there as part of the relief effort.

“I’m leaving behind all my bills, all my family, and I had a whole team to worry about,” said Chief Colin Raeburn, who led the group’s relief effort in Haiti. “I thought, ‘What the hell am I getting myself into?’”

Since the group’s founding in 1988, the Bedford-Stuyvesant Volunteer Ambulance Corp (BSVAC ) has trained more than 2,000 first responders and hundreds of emergency medical technicians (EMTs). With no paid staff or formal fundraising structure, BSVAC is used to making the most out of meager resources through a combination of hard work, thrift and faith.

After putting the word out far and wide that BSVAC was headed to Haiti to assist aid efforts, Commander and BSVAC Founder Rocky Robinson received a call from the Church of Scientology offering 44 seats in a private plane traveling to Haiti. Volunteers armed with trauma bags, candies and water immediately left for Haiti Jan. 16.

Since then, BSVAC has sent 139 volunteers and about $50,000 worth of supplies to Haiti. The latest group left March 26 and another contingent is preparing to leave in mid-April. While their work initially focused on providing emergency medical care, they are now working on long-term projects such as rebuilding a local hospital, helping orphans and creating a Haitian volunteer ambulance service. So far, they have assisted some 6,000 patients.

Over the last 22 years, the Corps has become a fixture of the Bedford-Stuyvesant community in Brooklyn. Robinson, and fellow EMT Joe Perez, started the group as an alternative to the city ambulance service, whose emergency response time in 1987 — during the height of the city’s drug epidemic — averaged as high as 30 minutes in the neighborhood, Robinson said.

Without an ambulance, let alone volunteers, they operated out of an abandoned building, responding to emergency dispatches on foot with oxygen tanks strapped to their backs and recruiting volunteers throughout the neighborhood. Since then, the group has expanded its services to include first responder and EMT training, in addition to ambulance services, and has participated in relief efforts after 9/11 and Hurricane Katrina.

Tamsin Wolf, a lawyer who has worked with BSVAC since 1988, sums up the experience of working with the corps:

“I’ve worked with a lot of nonprofits, but I’ve never been in a situation that is so elementally clear. If there is something to do, you need to do it,” Wolf said.

Gardel Prudent, a Haitian-American florist who lives in Fort Greene and works with BSVAC, left Haiti to come to the United States when he was only 13 years old — and he never thought that he would return to a country so changed.

“My heart is still bleeding from what I saw in Haiti,” said Prudent, who went to Haiti with BSVAC ’s first contingent in January. He described the garbage lining the streets and flushing into rivers and the foreign bulldozers and dump trucks parked for days outside the city while Haitians searched the rubble for relatives.

Since the earthquake, more than $1.5 billion in international aid has been sent to Haiti, yet much-needed supplies have been slow to arrive.

So far 700,000 tents and tarps have been distributed to 1.3 million displaced Haitians, according to U.N. Secretary General Ban Ki- Moon. UNICEF has estimated that 250,000 of those displaced are children.

BSVAC nurse Luna Charles, who returned at the end of March from a recent trip to Haiti, says that with the rainy season beginning as early as April, and the hurricane season set to start in June, aid workers are worried about flooding and other forms of extreme weather.

“If you go to the tent cities you’ll see that half of the families have tents, and half are just improvising, using the sheets, plastic and cardboard,” Charles said.

Charles is currently working to establish an orphanage for displaced children in Haiti.

BSVAC ’s ultimate goal is to help Haitian citizens establish a volunteer corps of their own, where Haitians will be trained as first responders and will eventually be able to train each other.

Charles has already signed up more than 900 Haitians who are eager to join.

“The whole purpose of our organization is to save a life. And that’s all we want to practice, in whatever state, in whatever country we go to,” Charles said.

RELIEF ON A SHOESTRING

Already saddled with the cost of supporting 11 BSVAC members currently on the ground in Haiti, the corps has been forced to postpone sending over $5,000 in supplies due to lack of funds.

While the BSVAC has worked with groups like the Red Cross and the William J. Clinton Foundation on the ground in Haiti — which have raised $369 million and $14 million, respectively — BSVAC has sustained its Haiti operations on little more than $40,000 over the past few months.

Out of more than a dozen volunteer corps in the tri-state area contacted for this article, including ambulance groups in Park Slope and Forest Hills, no other volunteer ambulance corps in the New York City area has sent volunteers directly to Haiti.

In the meantime, BSVAC continues to rely on small donations and a committed group of volunteers to sustain its efforts both in Bedford-Stuyvesant and abroad.

Robinson, who will turn 70 this June, identifies with the challenges the Haitian people face.

“When I started this ambulance corps, I didn’t have an ambulance. I didn’t have volunteers, so I equate myself with the Haitian people,” Robinson said. “They have to start from nothing, too. What are they going to do? Wait there for someone else to come and give them a new life? No. You’ve got to do it yourself.” 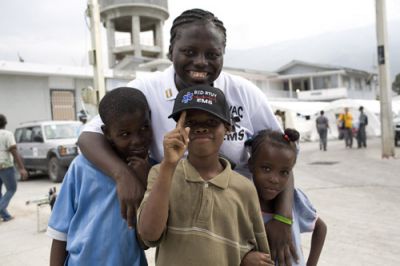