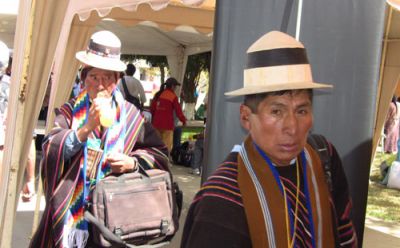 The pledges made at the failed U.N. Climate Summit in Copenhagen in December would allow global temperatures to rise as much as 5 percent, turning Africa into an arid wasteland and drowning many islands.

So it’s no wonder that developing nations that face the worst effects of increasing world temperatures were dissatisfied with the summit. Among those most upset was Bolivian President Evo Morales, who told reporters, “We have an obligation to save [all of] humanity, not just half of humanity.”

Morales has invited the world to an alternative “People’s Summit on Climate Change and the Rights of Mother Earth” that he will host in a village called Tiquipaya, outside of Cochabamba.

As The Indypendent went to press, more than 10,000 people were expected to gather for the summit April 19-22, joined by heads of state from many of the countries that felt left out of the U.N. talks.

“The only way to get negotiations back on track, not just for Bolivia or other countries, but for all of life, biodiversity, our Mother Earth is to put civil society back into the process,” said Pablo Solón Romero, Bolivia’s ambassador to the U.N.

Concern about climate change is already widespread in Bolivia, which has seen the water supply for its capital, La Paz, decrease by at least 40 percent from the melting of the Tuni Condoriri glacier.

On the summit’s agenda is a proposal to create a climate justice tribunal that could enforce emissions commitments and keep global warming down, ideally to one degree celsius. Another agenda item is the wording for a “Universal Declaration of Mother Earth Rights” that would be the equivalent of the U.N.’s 1948 Universal Declaration of Human Rights.

Working groups will tackle issues like “climate debt” with writer Eduardo Galeano and “climate migrants” with author Naomi Klein. The group “Do we need a referendum on climate change?” will include Democracy Now! host Amy Goodman.

Boliva’s ambassador to Switzerland, Angelica Navarro, told reporter Joseph Huff-Hanon that the summit will differ from what happened in Copenhagen, but “by no means is the Cochabamba meeting replacing the U.N. system. It’s an effort at dialogue, at opening up to each other.”

Already, progress is being made. At a U.N. climate discussion in Bonn, Germany held just days before the People’s Summit, Bolivian representatives got the negotiating teams to delay a deadline for proposals to the next major U.N. climate summit, in Cancún, Mexico, in late November.

This means that plans made in Cochabamba could be included in the follow-up to Copenhagen, perhaps yielding a more inclusive, and maybe more successful, outcome. “The central aim of any climate summit is not to save itself and accept any outcome,” observed Solón, “but to come to an agreement that will save humanity.”

Visit The Indypendent’s blog at indypendent.org for on-the-ground reports and photos from the People’s Summit. In our next issue, we’ll feature a full reportback, along with articles on indigenous-led climate justice movements in Bolivia and the nation’s progress in devloping a socialist agenda.