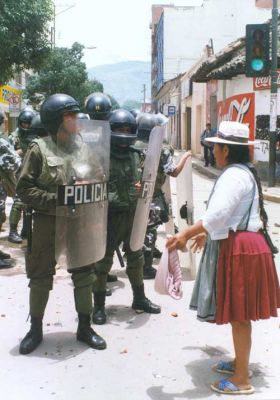 What would you do if your water bill shot up 200 percent to what amounted to a third of your income? When this happened to residents of Cochabamba, Bolivia, they started a revolt. This April marks the tenth anniversary of Bolivia’s “Water War.”

For much of the 1990s, Bolivia fell into a trap of taking loans from the World Bank and International Monetary Fund that required the privatization of key industries. As a result, the country’s electricity and telecommunications services, as well as mining operations, had all come under the ownership of multinational corporations.

In September 1999, Bolivia’s president signed a contract with Aguas del Tunari to privatize water services in Cochabamba, the nation’s third largest city. The corporation was owned by U.S.-based Bechtel Corp., along with Italy’s Edison and Spain’s Abengoa.

As the contract kicked in, water rates went through the roof, and Aguas del Tunari even acquired the right to charge for the use of wells dug by impoverished residents who lacked piped water. For native residents, Aymaras, Quechuas and Guaraní, the contract cut off their access to the blood of “Pachamama,” or Mother Earth.

Outraged middle-class homeowners joined the poor and indigenous to form a Coalition in Defense of Water and Life that fought to cancel the contract. They held a demonstration that took over Cochabamba’s central plaza. Protesters stayed there for four days even as police shot into the unarmed crowd, killing one man and injuring others.

After the protests, Aguas del Tunari’s contract was canceled and the company left Bolivia. It then sought $50 million in compensation from a World Bank court that operated behind closed doors. But in 2006, after worldwide demand that it drop the case, the company settled for a token payment of two bolivianos (about 30 cents).

Now water services in Cochabamba are once again supplied by the municipal water and sanitation company, SEMAPA, but the struggle for access continues. Studies show as much as two thirds of the city still lacks piped water because new infrastructure has been stalled by lack of funds. Many residents question the water quality and prefer to buy bottled water to drink. The problems are due in part to the patronage and graft that has long been a problem for SEMAPA.

Frustrated with systemic corruption, residents in the southern districts of Cochabamba developed their own system of water distribution. The Democracy Center, a U.S. nonprofit that works in Bolivia, profiled several cooperatives that use elevated tanks and wells provide water for cooking and bathing via a neighborhood water system. One coop president told researchers with the group that he would prefer to remain independent from SEMAPA so policies and prices would continue to be decided upon communally.

Despite the problems, SEMAPA is slowly expanding water service to new areas of the city. This is what sets it apart from transnational water companies that maximize their profits by charging higher fees for already existing customers, but generally fail to invest in new infrastructure — the most expensive part of their business. In this way, Bolivia’s “water war” was seen as a decisive victory in the battle against the commodification of water.

For information on the Bolivian Climate Summit (April 19-22), click here.