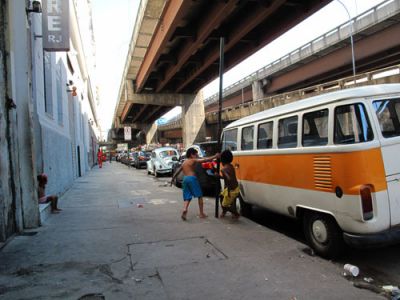 RIO DE JANEIRO — Ever since Rio de Janeiro learned it would host the 2016 Olympics, police have begun shutting down colorfully painted street vendor stands that line the city’s famous beaches. Vendors are told that in order to regain their livelihoods they must apply for and secure a license. If they’re allowed to return, they’ll have to operate out of a generic white tent.

Sound familiar? The crackdown is part of Rio’s “Shock of Order” campaign, modeled after a “cleanup” of New York City street vendors in the 1990s by former Mayor Rudolph Giuliani (see sidebar below).

Rio signed a contract in December with Giuliani’s global security firm to help stamp out crime in the lead-up to the 2016 Summer Olympic Games and 2014 World Cup. The city expects to spend an estimated $14 billion on security and infrastructure upgrades. But the impoverished residents of Rio’s favelas expect mostly shock, and little order.

“Before, poor people could at least have their business by the coast, selling things on the street. Now they can’t,” said Wagner Dutra, who grew up in one of the dozens of shantytowns on the outskirts of Rio.

A statement from Rio’s secretary of public order says the Shock of Order campaign aims to “end decades of omission of public policy in questions that most afflict the public.” But Dutra, who now lives in New York, says the government must change how it treats people in favelas before any meaningful change will happen. “If you want to talk about giving people human rights, you have to treat people humanely first,” he said.

This concern was echoed in March when Rio hosted the United Nations’ 5th World Urban Forum. “Big events like the Olympics and the World Cup can be an opportunity … to mobilize investment into the city’s slums,” said Raquel Rolnik, the U.N. Special Rapporteur on Adequate Housing and a city planning professor at the University of São Paul in Brazil. “But unfortunately, the dominant approach we have seen with mega-events is that they are part of the machinery of the territorial exclusion of the poor.” 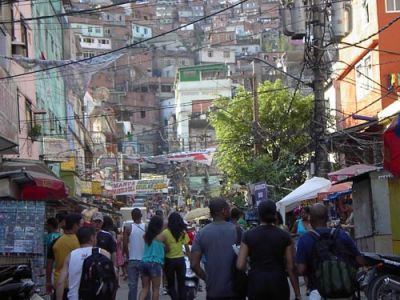 Just a mile away from where the forum was held, favelas crowd nearly every inch of the city’s surrounding mountainsides, filled with red brick shacks topped by tin roofs. In the summer, heavy rains bring mudslides that destroy the cheap homes and kill residents.

Many residents feel the government is more invested in displacing or hiding them than in improving their lives. The Shock of Order campaign has sent police into the favelas to destroy structures built without a permit. Construction has already begun on concrete walls to contain 19 slums; the barriers will displace 550 houses and run along the major highway from the international airport into the city.

“When the Olympics is over, everything will be over. There will be no difference,” stressed Elza Santiago, a resident of Morro da Coroa, a favela that has not had electricity since December. “Our people don’t have water. We’re walking up the hill to our favelas with water because we don’t have any. No one is talking about the Olympics, that is our Olympics.”

Santiago is a member of Os Muheres Bordadeiras da Coroa, a women’s cooperative that sells handcrafted goods to raise funds for education programs offered to women and children living in their neighborhood. She was invited to speak at the U.N. forum, but she believes that academics, organizers and city government officials are more interested in talking about the issues than actually solving them.

“People come to our city and no one sees the misery, the hunger, the degradation, the destruction of our children, the corruption, and drugs,” Santiago explained in frustration. “I want basics. I want education, food, light, water.”

Former New York City Mayor Rudolph Giuliani got into the lucrative security consulting business three months after the 9/11 attacks. Since then his firm, Giuliani Partners LLC, has earned about $40 million in annual revenue. But Giuliani gained a reputation for imposing social order much earlier in his mayoral career. During the 1990s, he adapted a “zerotolerance” policing policy based on the theory that cracking down on minor legal infractions would prevent violent crime as well.

Under the rubric of improving “quality of life,” Giuliani arrested graffiti artists and panhandlers like the “squeegee men” who cleaned windshields in exchange for payment. But the cornerstone of his campaign was criminalizing street vendors. He began by targeting food vendors who worked in the downtown area and then tried to expand the ban to 144 streets across the city, pushing the vendors into open-air markets in abandoned lots far from heavy pedestrian traffic. At one point hot dog sellers went on strike, gathering their carts near City Hall with the message, “Bite me, Rudy.”

Tension from this campaign collided with an atmosphere of racial intolerance caused by expanded “random” stop-and-frisk tactics by police against young black men. In 1999, four NYPD police officers gunned down 23-yearold Amadou Diallo, a vendor from Guinea who sold hats and gloves, after they mistook his wallet for a weapon.

Critics say Giuliani took credit for falling crime rates that were really due to causes beyond local policy and had already begun to fall prior to his administration. But this didn’t stop him from using his reputation to score a $4 million dollar consulting fee with Mexico City in 2004. He presented the local government with a widely-criticized crime-fighting project that targeted street vendors, panhandlers and… squeegee men, prompting one man to ask the Seattle Times, “Why isn’t Señor Giuliani picking on the real criminals instead of people trying to earn enough to eat?”

Now Giuliani is staying on message in Rio de Janeiro. He visited the favelas in December after contracting with the city to improve security ahead of the 2016 Olympics, telling reporters, “You have to pay attention to big and small things.”