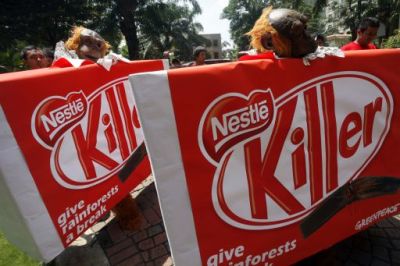 Environmentalists were calling Greenpeace’s campaign against Nestlé a success two weeks ago when it agreed to drop its Indonesian palm oil producer Sinar Mas Group, which is responsible for the destruction of rain forests and orangutan habitats. But it seems success was claimed not only too early, but perhaps a bit inappropriately. Enviros forgot about the millions of Indonesian farmers who rely on Sinar Mas to make a living. According to the Jakarta Globe:

“About 10 million oil palm farmers in 20 Indonesian provinces have stated their readiness to boycott Nestle products. Apkasindo [Indonesian Palm Oil Growers Association] is now preparing to draw up a list of Nestle products on the market,” Asmar Arsjad, Apkasindo secretary general, said over the weekend, adding that if Nestle stops buying from Sinar Mas it would hurt palm oil producers.

So, as is often the case, environmentalists have indirectly pitted themselves against workers. And given their numbers, these workers may have the upper hand when it comes to persuasion. In addition to the boycott, Indonesian and Malaysian palm oil producers are prepared to stop exports of crude palm oil to the US and the EU if negative campaigns over their environmental practices continue.

Greenpeace and it’s supporters have said little about the farm workers’ reaction. Instead, they’ve continued to post negative comments to Nestlé’s Facebook page regarding its indirect ties to Sinar Mas through its supplier Cargill.

Given that Indonesia has lost almost three-quarters of its natural forest, Greenpeace is right to continue its protest. But they must acknowledge the plight of the workers. The isn’t so much about getting Nestlé to sever ties with one particular palm oil producer, it should also be about demanding that Nestlé and other multinationals help make developing countries less dependent on producing a handful of crops. Resources will eventually be drained from Indonesia and its farm workers will have nothing then because they will have become too reliant on producing one crop. Nestlé and other multinationals have a responsibility to these countries and Greenpeace should be there to remind them and hold them accountable.