The 150-square-foot banner, which stretched between the two flagpoles, read, “If Bloomberg Is So Green, Why Is NYC America’s #1 Consumer Of Rainforest Wood?” 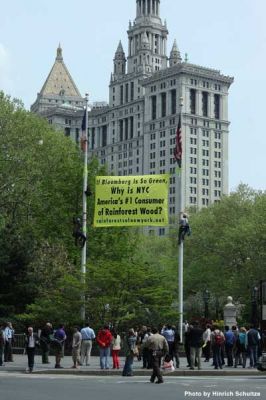 “It’s the 40th Anniversary of Earth Day and it’s simply unacceptable that the City is still using rainforest wood for public infrastructure,” said Tim Doody, New York City campaign coordinator for Rainforest Relief and climber on the west flagpole, in a press release.

“We’re in front of Mayor Bloomberg’s office window and we hope our message is large enough for him to see it,” Doody said.

This action has been organized by Rainforest Relief and the New York Climate Action Group (NYCAG).

According to Rainforest Relief, the banner was dropped near to where the City has installed (or is currently installing) tropical timber include the decking of the Brooklyn Bridge, South Street Seaport, Battery Park, Fulton Ferry Terminal and Empire-Fulton State Park, fenderings and pilings at the Staten Island Ferry terminals, 12.5 miles of boardwalk, Hudson River Park, Washington Square Park, and the High Line, tens of thousands of park benches throughout the city, and hundreds of miles of subway track ties.

“Tropical deforestation is responsible for more greenhouse gases than all planes, trains, automobiles and ships combined,” said J.K. Canepa, co-founder of NYCAG, in the press release. “The world watches New York City. Let’s take the lead and show the world what it truly means to be green!” 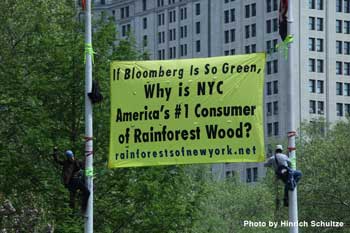