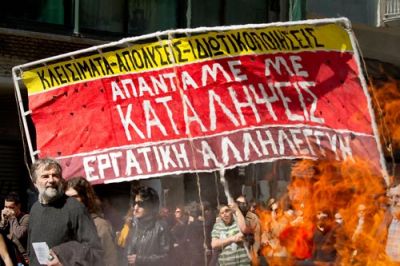 As a Greek teaching at the City University of New York, I can’t help but notice the parallels between brutal budget cuts in Greece and the impact of the economic crisis in the United States.

Economic and political leaders around the world are bent on resolving the latest capitalist crisis by shifting the burden onto those least responsible for its eruption. One of the most recent examples is on display in Greece, where cutbacks amid an economic meltdown have met widespread resistance.

The full force of the current economic crisis hit Greece later than the United States. The country went through a temporary period of economic growth fueled by debt and a real-estate and construction boom partly linked to the 2004 Olympics in Athens.

But the story of Greece in the last generation or so remains one of permanent economic and social turmoil linked to a process of restructuring characterized by privatization, the spread of “flexible” and insecure forms of employment, growing economic inequality and chronically high levels of unemployment — especially among women and young workers.

As with other countries, the European Union was the vehicle for this neoliberal restructuring. Joining the exclusive “Euro zone” was supposed to mark Greece’s ascendance into a developed capitalist economy. But inclusion requires restrictive policies aimed at keeping budget deficits and inflation low at the cost of high levels of unemployment.

The economic injustice and social disintegration these policies generated led to the explosive youth revolt that shook Greece in December 2008 and sent chills down the collective spine of economic and political elites in Europe and beyond. Interestingly, this revolt broke out even before Greece had felt the full force of the global capitalist crisis. But the bailout of Greek banks by the Greek government — some 28 billion euros (roughly $38 billion) — fed people’s rage at the incompetence and corruption of Greek economic and political elites.

Then in September 2009, Greece announced that its deficit would be four times the European Union’s maximum 3 percent of national income. This has driven up the cost of interest rates on Greece’s loans and debt.

Now that the full force of the crisis is being felt in Greece, the government is imposing further savage cutbacks. More than 600,000 public-sector workers have seen their wages sliced and pensions frozen. Unemployment has soared to 14.6 percent and is projected to rise to 20 percent. A recent survey in Greece found half of respondents said their salaries no longer cover their needs, and the Greek press has reported on suicides of business owners whose businesses fail and workers who have just lost their jobs.

Even more draconian measures could be imposed if Greece turns to the International Monetary Fund and the European Union for a loan of 45 billion euros ($61 billion) to continue servicing its debt.

The “socialist” government that imposed these cuts won last fall’s election by opposing the then-governing Conservative Party’s plans to resolve the crisis by adapting “necessary” austerity measures. By arguing that these cuts would deepen the crisis and lead to the collapse of tax revenues, the socialists won the election by a 10-point margin, the largest in Greece’s recent political history.

But now Greeks are facing what Americans faced a year earlier. They voted for candidates who claimed to represent change, only to get governments that serve large corporations and global financial interests rather than addressing the needs of ordinary citizens.

In a sense, the economic policies of the Greek government are worse than those of the Democrats. Although the Obama administration has announced budget freezes in the coming years, he did push for a stimulus package rather than for austerity measures. But many progressive economists have noted that the effectiveness of this package was diminished both by its small size and the concessions it made to the trickle-down International philosophy of lower taxes on the rich.

One of the effects of Obama’s policies is a 10 percent official unemployment rate, much higher than what the Obama administration was predicting. His stimulus package failed to provide sufficient support to states that find themselves forced to balance budgets by cutting social services.

The economic crisis has also advanced the creeping privatization of public colleges and universities. This has been most obvious in California, which has imposed dramatic tuition hikes, triggering student and faculty strikes, building occupations and an inspiring resistance movement. But it has also been true in New York.

Governor David Paterson recently called for yet another round of cuts for CUNY and SUNY and proposed to make it easier for universities to raise tuition. If approved, these measures would continue to shift the cost of public higher education from the city and the state onto the students. Education is on its way to becoming just another commodity accessible only to those who can afford to buy it.

The situation faced in New York and throughout the United States may not be quite as dramatic as that in Greece, but the pattern is the same. Those most responsible for the global crisis have shifted the burden of the crisis to the rest of us — whether it be Greek workers facing lower incomes and higher prices, U.S. public college students paying higher tuition for an educational experience diminished by relentless budget cuts or ordinary Americans financing Wall Street bailouts even as they are losing their jobs and homes.

But while the austerity measures in Greece have led to strikes and popular nationwide mobilizations, similar resistance is just beginning to coalesce in the United States.

Costas Panayotakis teaches sociology at the New York City College of Technology-City University of New York. He is an active member of the Professional Staff Congress, the union representing CUNY faculty members and professional staff.

Greek Prime Minister Giorgos Papandreou became the butt of jokes in February after he announced the debt-ridden country was essentially bankrupt and he planned to take draconian steps to cut its deficit. On television, mock commercials declared, “It’s time for the poor to pay, the rich have paid enough.” But beneath the humor was a strong current of resistance, and protests soon erupted.

Some of the first “austerity measures” hit the public sector: Wages would be cut by 8 percent or more, and pensions would kick in after 37 instead of 35 years of work. This brought thousands of workers into the streets of Athens on Feb. 10 and 24 for protests organized by the civil servants union. Their refusal to work brought the country to a standstill — halting trains, shuttering primary schools and universities and leaving hospitals open for emergency services only.

The protests escalated in March when private sector employees joined with public sector workers for a 48-hour general strike. Just as bus drivers and train operators refused to “leave the station,” air-traffic control workers stopped all flights from entering or leaving the country. Banks, post offices and municipal buildings were closed, and even police and firemen, unable to strike, decided to hold a protest against further cuts in their already meager salaries. Not to be outdone, anarchists dropped a banner from the Acropolis that read, “Take the Measures Back.”

An estimated three million Greeks — out of a total population of 11 million — participated in the general strike, which spread beyond the capital city of Athens. Greece’s second largest city, Thessaloniki, hosted six different marches — one of them attracting about 7,000 people who chanted, “Make the bosses pay!” In Ionnina about 1,500 people braved pouring rain to protest the measures. Demonstrators in Heracleion, Crete, blockaded shops that refused to allow their workers to strike.

The demonstrations were not without violence. Riot police used tear gas and batons in their attempt to suppress rock-throwing protesters. Many government buildings and banks had their windows smashed. At one point, radicals pushing for long-term strikes punched and kicked the head of Greece’s main private-sector workers union before he was to address a crowd of strikers outside Parliament.

As The Indypendent went to press, another nationwide protest had been called for April 22 to oppose a loan by the International Monetary Fund and several European countries that could result in even further cutbacks and higher taxes.