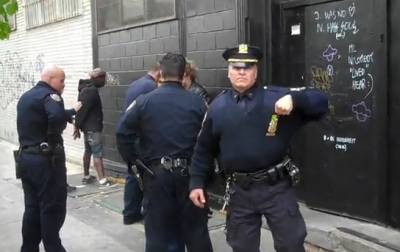 On April 13 in Brooklyn, the NYPD entered without a warrant 13 Thames Art Space, a Bushwick based art and performance space where members of the Independent Anarchist Media (I AM) Collective have been organizing the Fourth Annual NYC Anarchist Film Festival in honor of Brad Will.

Two plainclothes detectives entered first, followed quickly by a Lieutenant and vans full of blue shirt officers. After corralling everyone present in the back room, they searched the space and detained and arrested two members of the collective. You can watch video of the raid here.

The I AM collective was preparing for the NYC Anarchist Film Festival, a showcase of resistance movements and insurrectionary events from around the world presented from an anarchist and anti-authoritarian perspective.

The I AM collective issued a statement following the raid:

“Regardless of these attacks, the film festival will happen as planned on Friday April 16, 2010 at Judson Memorial Church. The voice of
decentralized creative communities will not be silenced by police repression. They cannot stop us with illegal raids and targeted harassment, because we are everywhere.”

The story was picked up by the local NBC affiliate, and further reported by the NYT City Room blog:

One of them, Johnny Ludolph, 19, said he was arrested because he had not paid old tickets issued for drinking beer on the sidewalk.

But when he arrived at the 90th Precinct station house, Mr. Ludolph said, the police seemed most interested in asking him about the fliers.

The fliers were for the NYC Anarchist Film Festival. The address: 13 Thames Street. Some fliers included the formula “energy x mass + love =” next to an illustration of an explosion. One showed a stylized image of a helmeted police officer carrying a plastic shield and covered by flames.

“They asked me, ‘Who’s running this, who’s involved?’ ” Mr. Ludolph said Wednesday afternoon as he sat on a wooden table inside 13 Thames. Mr. Ludolph said he told the police he did not know.