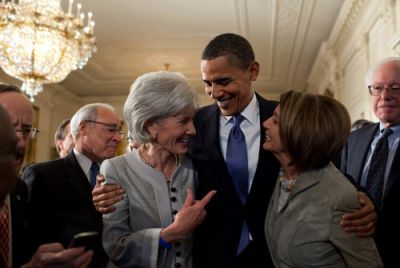 It was high drama on Capitol Hill in March, the culmination of a year-long, tooth-and-nail fight between Democrats and Republicans about overhauling national healthcare. When the battle was over, President Barack Obama signed a historic bill aimed at expanding health insurance coverage and reforming an expensive, inefficient healthcare system that leaves 46 million Americans without coverage and the middle class in debt to its eyeballs to pay for it. For the first time, healthcare in America will approach the status of a right, rather than something one has to “earn.”

But one wonders, sometimes, what the fuss was about. For all the apocalyptic rhetoric from Republican opponents, the new structure is a “state-based, incremental, industry-friendly reform that builds on our current system,” said Micah Weinberg, senior research fellow with the New America Foundation.

Nor is this the end of the fight. It’s more like the beginning. As with Social Security in its early years, it will be a long time — a decade, if not more — before we know the exact structure of the new system. Regulators, including agencies in all 50 states, will be busy making many thousands of rules and figuring out how to enforce them. Congress will no doubt have to pass several more modest bills to resolve regulatory issues. Expect more efforts to mold the emerging universal healthcare system in a conservative, pro-business direction.

WHAT DOES IT DO, EXACTLY?

The Patient Protection Act is a huge bill, its provisions touching nearly every aspect of healthcare. The most conspicuous parts of it are pretty simple, however (see sidebar).

The new law expands coverage by requiring nearly every American to purchase health insurance. It does this through direct subsidies and by expanding Medicaid to cover more people at higher income levels. A combination of incentives and penalties are supposed to encourage employers to keep providing coverage for their workers. Meanwhile, health insurance exchanges will be set up in each state in the hope that they can make a basic insurance package available at lower rates to lower-income households.

Obamacare comes with a $965 billion price tag over its first 10 years. That may seem like a lot, but it’s much cheaper than preserving the Bush tax cuts for upper-income earners.

The new system pays for itself in part by charging penalties to people and employers who don’t purchase insurance. It also sets stricter standards for Medicare Advantage, the private-insurer alternative to Medicare, and phases out the subsidies Washington pays to providers under that program.

But higher taxes are where the big money is. High-income individuals and couples will be slapped with a new tax on all earnings, including investment income. That partially reverses decades of Republican tax policy that walled off more and more of big investors’ dividend and capital-gains earnings. New excise taxes will fall on pharmaceutical companies, medical device manufacturers, and health insurers, as well as on high-cost insurance plans.

Together, the Congressional Budget Office projects, the new levies will raise $1.1 trillion over 10 years, more than enough to pay for the expanded coverage. In fact, the administration claims the new revenue structure will reduce the federal deficit by $1.2 trillion in its second decade.

All of this is so complex that it will take four years just to put the basic elements in place. But it’s quite possible that a generation from now, the most talked-about elements of Obamacare will be looked upon as merely a stop-gap while the real revolution in healthcare law played itself out. The new law also spawns a host of smallscale programs, demonstration projects, studies, and research efforts designed to shift the focus on American healthcare from managing illness to preventing it and from rewarding the provision of service — whatever the outcome — to rewarding efficient, highquality care.

“A lot of the focus has been on the expansion of coverage, because it’s the easiest to talk about,” Weinberg said. “But a substantial part of it is delivery system reforms, getting people the right care at the right time for the right price.”

Obamacare could begin to move the United States to a more “evidence-based” decision-making model through a trio of new agencies: the Center for Medicare and Medicaid Innovation, the Independent Payment Advisory Board and the Patient-Centered Outcomes Research Institute. As corporate control loosens, the factors that determine which new drug or procedure or prosthetic device is approved and which is rejected will become more rational and transparent, and the public will have a stronger say in the kind of healthcare system it gets. This, rather than “socialized” medicine, is what free-market fetishists are really afraid of.

RETURN OF THE PUBLIC OPTION

The problem, of course, is that the United States is not Europe. Given the decade or so that it will take for the new system to evolve, the healthcare industry could well get control of the process. “The insurance companies will be looking to game the system five ways to Sunday,” predicts Roger Hickey, co-director of the Campaign for America’s Future, which supported the bill but criticizes many of its features.

Another problem is that Obamacare does nothing to untangle what remains a confusing and splintered healthcare establishment.

“It’s ironic that there’s all of this public freakout about government ‘taking over’ healthcare when it really just builds on existing systems,” Weinberg said. “Now, we’re going to have universal coverage, but it’s split up between different care systems: Medicare, Medicaid, employer-based and individual insurance systems.”

There’s no guarantee the situation will improve. The new law does nothing to curb the monopolies that pharmaceutical and medical technology companies enjoy and that drive up the cost of care. In fact, to get biotech companies to go along with the reform, the final bill stretches out their patent protections and throws in a helping of new tax credits for product research and development.

Because the new health insurance exchanges will be set up and administered by the states, the quality, price and comprehensiveness of coverage are bound to vary. Some states will require a more complete package of benefits. Some will regulate the premiums insurers can charge more strictly.

The central flaw of the new system is that it attempts to channel this new entitlement through the private sector, subjecting people’s needs at every turn to the imperative to generate maximum profit. But what if that makes a public option to private insurance — or even a full-fledged single-payer, European-style insurance system — more attractive? One of the events that propelled the Patient Protection Act over the line in its final weeks was the announcement that insurance giant Anthem Blue Cross would be raising rates in California by as much as 39 percent, prompting howls of outrage.

“Insurance companies are likely to keep raising rates on a regular basis,” Hickey said. “That, more than anything else, will help us progressives to push for a public option. It’s the result of the inevitable dynamic of the insurance companies pissing people off.”

One irony of the healthcare debate was that the public liked the public option, opinion polls consistently found. Only healthcare providers and the lawmakers they patronized didn’t, but the latter had the leverage. But although Democrats agreed not to include a public option in the final bill, they didn’t completely shut the door on it.

Starting in 2017, states will be able to apply to the Secretary of Health and Human Services for a waiver allowing them to create a public option, provided it’s at least as comprehensive and affordable as the system based on health insurance exchanges. If a few of these materialize, they could spur demand for a public option available nationally.

That’s one possible road stretching out from the new law. The private healthcare industry, it’s safe to say, will be drawing another.

Eric Laursen, an independent journalist, has been covering healthcare and pensions for more than two decades.