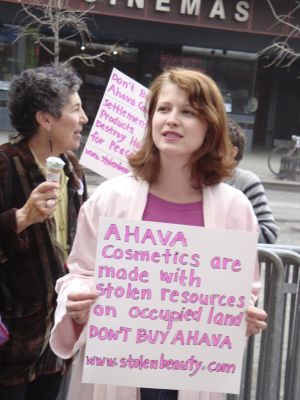 Over two-dozen Palestine solidarity activists demonstrated outside of two Ricky’s NYC cosmetics stores in Manhattan this evening, calling on the store to stop carrying AHAVA beauty products because, while it’s labeled as made in Israel, the company exploits Palestinian resources and runs a factory on an illegal Jewish-only settlement in the occupied West Bank.

The action was organized by CODEPINK NYC, Adalah-NY, and the Stolen Beauty campaign, and came a day after the second global boycott, divestment and sanctions (BDS) day of action and Palestinian Land Day that targeted Israeli occupation and colonization.

Clad in pink towels and bathrobes, protesters chanted, “Ricky’s, Ricky’s don’t you know? AHAVA has got to go,” and “AHAVA sells beauty creams, killing Palestine’s hopes and dreams.”  The activists passed out flyers to pedestrians explaining the boycott of AHAVA and urging them to contact Ricky’s to demand that the chain stop stocking AHAVA products.

Since August 2009, activists have been calling on Ricky’s NYC CEO Dominick Costello to stop carrying AHAVA beauty products, and this past Valentine’s Day, 2,000 emails were sent to Costello with that message.

Nancy Kricorian, a CODEPINK staffer who is a leader in the Stolen Beauty campaign, said that as a result of pressure from BDS activists, Costello called about a week and half ago and had a conversation with her, but said that Ricky’s would continue stocking AHAVA. 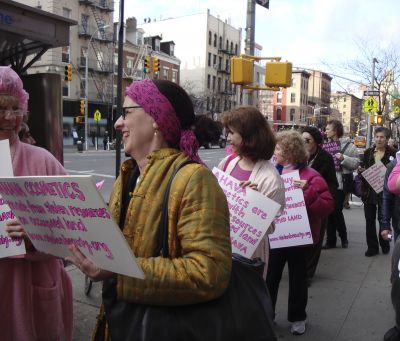 “We can’t wait for our U.S. government to lead on this,” said Kricorian.  “It’s up to people around the world to take the profit out of the occupation.”

Since the 1967 Six-Day War, Israel has illegally occupied the West Bank and the Gaza Strip, and 500,000 illegal Jewish settlers currently live on Palestinian land, in direct contravention of international law.  An AHAVA factory is in the illegal settlement of Mitzpe Shalem in the West Bank.

The Stolen Beauty campaign targeting AHAVA is part of the larger BDS movement, which seeks to pressure Israel into withdrawing from the occupied Palestinian territories, dismantling illegal settlements, and implementing the right of return for Palestinian refugees.

AHAVA is “putting across a product that steals the resources that create beauty, and not giving justice to the people who should be getting it,” said Barbara Harris, a member of CODEPINK.

Yesterday, similar actions calling for the boycott of AHAVA were held in Washington, D.C. and Seattle, and the International Solidarity Movement-London have been holding bi-weekly protests outside of an AHAVA store in London.
“When people buy things, they’re voting, and so what you’re voting for in this case when you buy products from the Dead Sea, products that claim to be from Israel, [you vote for an] illegal settlement at the Dead Sea,” said Dave Lippman, a member of Adalah-NY.  “Boycott, divestment and sanctions is now gaining great steam in the wake of Gaza and people all over the world, every day, are making changes.”