Post your own comments online at the end of each article or e-mail letters@indypendent.org. 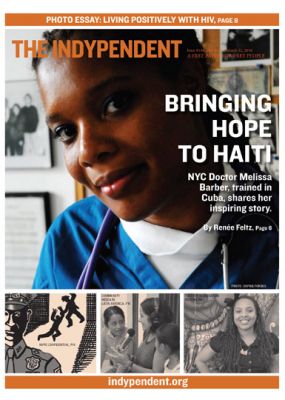 ART AS A CATALYST
Response to “Through the Lens: A New Exploration of New York,” March 10:

Thank you for presenting these very important shows documenting the changing dynamics of New York City. At this point, I believe art is the only way left to create the change that we have been looking for. These exhibitions will hopefully serve as a catalyst for the art community to take control of their power.
—Laurie Cumbo

ABORTION DEBATE EQUALITY
Responses to “‘Not Our Kind’: Responding to the Black antiabortion Movement,” March 10:

While I dug both the review and the book, I have one small quibble. It’s not entirely true that the Street Crime Unit was simply re-named. As Leonard Levitt details in his book, NYPD Confidential, the city-wide Street Crime Unit was, in fact, disbanded post-Diallo, and all the cops on it promoted to detective. What replaced the Street Crime Unit was precinct by precinct “anti-crime” teams, which go around in street clothes looking for trouble and collars. Precinct anti-crime teams are way more supervisor-heavy if there’s no anti-crime sergeant on duty. Officers who do routine patrol in uniform and generally far lessprone to “cowboy” behavior.
—Matt

Helping young students pick up where they had to leave because of earthquake is admirable, especially in case of those youth who have relatives that lost their lives or were seriously wounded.
—Harbans Singh