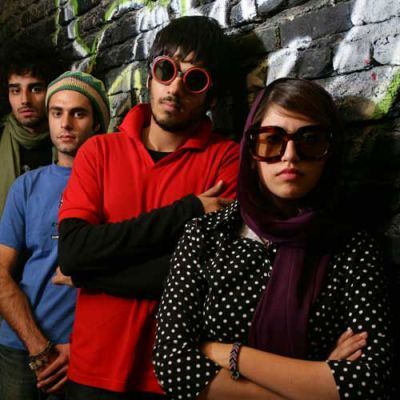 No One Knows About Persian Cats
Directed by Bahman Ghobadi
A Production of Mij Film Co., 2009
In Farsi with English titles
Opening April 16 at the IFC, Manhattan

The vibrant, exciting—and quite illegal—underground music scene in Tehran is the real star of No One Knows About Persian Cats, the stereotype-shattering new film by Kurdish director Bahman Ghobadi.

Iran’s Muslim law frowns on “decadent” music in general, rock music in particular, and especially the sight and sounds of women singing in public, all of which it regards as what could be described as “occasions of sin.” Yet scores—perhaps hundreds—of young Iranians are forming bands with women up front, making rock music, performing in hidden venues, and, when it all gets too hard, trying to leave Iran altogether for someplace where they can play freely. No One Knows About Persian Cats follows musicians Negar (Negar Shaghaghi) and Ashkan (Ashkan Koshanejad) as they try to put a band together and acquire the passports and visas—forged—that will get them out of Tehran if they fail. Helping them in both quests is Hadar (Hamed Bedad), a would-be mover and shaker who arranges one joyous outdoor concert before things begin to fall apart …

But the plot of Cats is tenuous at most and, at times, submerged altogether in the sights and sounds of Tehran today. Ghobadi, whose earlier films include A Time for Drunken Horses and Turtles Can Fly, has said that the movie is also about “the rhythm and dynamism of Tehran, hectic as it is,” and much of the film’s hour and a half is devoted to exactly that. At intervals, Ghobadi’s camera abandons the story line altogether to spend five or seven minutes roaming the city, by day or by night, accompanied by a selections of forbidden music. (“I can’t wait for the soundtrack!” said my companion at the screening as the lights came up.) Both the story and the intervals defy much of what we may think we know about Iran, as the musicians and their friends careen around the city on motorcycles, in blue jeans, women and men alike bareheaded. The government may be harsh and repressive, but it seems not to have yet repressed the spirit of Tehran.

Ghobadi is no stranger to repression. His previous films were hardly shown at all in Iran (although highly praised elsewhere), and he has said that he’s certain that Cats, which was filmed in secret with no permits, won’t be released there at all. Ghobadi’s fianceé, Roxana Saberi, who collaborated with him on the screenplay, has seen the inside of Iran’s prisons; she’s the Iranian-American journalist who last year was imprisoned as a spy in Iran, until an international outcry brought about her release. And Negar Shaghaghi and Ashkan Koshanejad, who play the struggling young musicians in the film, are, in fact, struggling young Iranian musicians, not actors. In other words, No One Knows About Persian Cats speaks with authority about the artists whose struggles it relates. It will make you ache for their plight. It will make you angry on their behalf.

What to do with that anger is another question, of course. It takes a delicate balancing act to oppose the repression that bans music and declares that women shouldn’t perform, on the one hand, without in any way joining the West’s new crusade against all things Arab and Muslim in general or advocating military action against Iran in particular. But finding that balance is the task of those of us who do, in fact, oppose both repressive regimes, wherever they’re found, and the world cop policies of the last several U.S. administrations, including, alas, the current one.

Better understanding of the Iranian people is a start. For that we have this movie, at least—and the soundtrack, which will be available from Milan Records as of April 13.