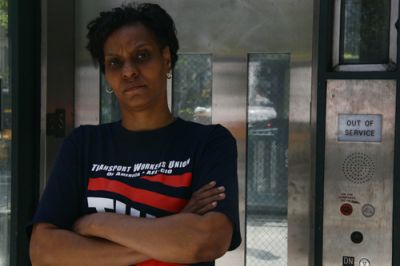 Sabrina Greenwood started work as a station agent with the Metropolitan Transportation Authority (MTA) five years ago with the hope of one day working her way up to the position of station supervisor.

But when she recently received a letter from the MTA that said that she, along with 500 other station agents who belong to Local 100 of the Transport Workers Union, would be laid off on May 7, Greenwood had to put her plans on hold.

“It’s frustrating, I have kids to feed. You’re not just laying me off, you’re laying off my four children, too,” said Greenwood, who lives near Co-op City in the Bronx.

While Greenwood, 38, may be reclassified to a different MTA job, she is worried that in the current economy her chance of finding work that matches her current salary of $50,000 a year is slim.

With the MTA facing a budget shortfall of $800 milllion — which has already led to fare hikes, service cutbacks and layoffs — TWU is leading the charge to stand up for green jobs and affordable transportation.

The Transport Workers Union has formed Keep America Moving, a national coalition of transportation industry workers, environmentalists, advocates and political leaders that are working together to save affordable mass transit by mobilizing transit workers and riders alike.

Coalition members include the American Federation of State, County and Municipal Employees, the Rainbow Push Coalition and Sierra Club NYC.

Funding is an essential part of the coalition’s short-term goals, especially as the MTA faces extreme budget deficits.

“Mass transit is a public service. And in this recession, the public sector has become the sacrificial lamb,” said J.P. Patafio, the national director of Keep America Moving.

Patafio, along with other coalition members, is calling for an increase in federal funding for public transportation, both in New York City and throughout the country.

For Linda Harrison, another station agent who will be laid off from her current position on May 7, worker cutbacks also mean a decrease in safety for commuters.

Harrison, who often works the night shift, says that having agents in subway station booths deters crime, and also allows employees to look out for customer safety. In addition to selling subway cards and providing tourists with directions, Harrison acts as the eyes and ears of the MTA, watching out for sick and elderly commuters, reuniting lost children with their parents and stopping trains when customers fall on the tracks.

“The MTA always says, ‘If you see something, say something.’ If we’re not there, who are you saying it to?” Greenwood said.

Of the more than $1 billion in funding that the MTA has received in federal stimulus funds, only 10 percent can be used for operational expenses — which includes paying salaries — while the rest of the monies must be earmarked for capital projects, such as Second Avenue subway line and the Fulton Transit Center.

With more than 70,000 MTA employees throughout the city, 35,000 of whom belong to TWU’s Local 100, many transportation advocates, including Patafio, think that MTA Chief Jay Walder should rethink his refusal to allocate available stimulus funds for operational expenses.

Patafio views Walder’s resistance as an attempt to injure unions and bolster the rightwing view that unions are to blame for the MTA’s budget deficit.

But with the interstate highway system already receiving 82 percent of federal transportation funding, pressuring politicians to increase spending for public transportation at the national level will not be easy.

The Keep America Moving coalition is looking to two upcoming actions to mobilize supporters and boost public engagement in the cause for affordable transportation.

On April 26 and 27, union members, community advocates and environmentalists will participate in rallies and lobby politicians in Washington, D.C., for increased federal funding for public transportation.

Greenwood, who plans to be joined by her four children, coworkers and neighbors, is looking forward to traveling to Washington, D.C., to take part in the weekend’s events.

A rally at Penn Station on May 4 to stop transit cuts is also in the works. In addition to the 500 station agent jobs that will be cut in May, an additional 500 bus drivers will be laid off starting in June. According to Patafio, the May 4 action is emblematic of the kind of movement the coalition is working to create.

“People have to stand up, rise up and be counted. We need to stand up and say we’re not going to take it,” Patafio said.

Harrison, who will turn 50 later this month, has postponed her birthday plans to focus on working with TWU to speak out about the job cuts.

“We’re going to fight it until the end. Like they say, it’s not over until the fat lady sings,” Harrison said. 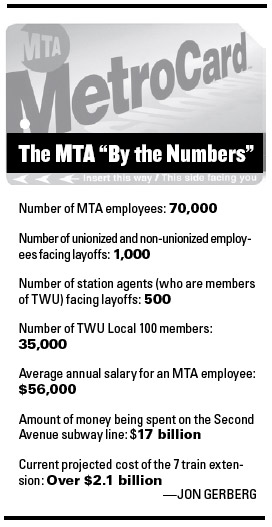