Marisol Ramos is tired of her friends and family living in fear of deportation. The 25-year-old South Bronx native is walking 250 miles to lobby for a moratorium on deportations of undocumented families as well as the passage of the Development, Relief and Education for Alien Minors (DREAM) Act. The legislation would establish a path to citizenship for undocumented youth. Four Miami youth led a similar walk from Miami to Washington, D.C., dubbed the “Trail of Dreams.”

Ramos will be joined by three other members of the New York State Youth Leadership Council — Mexican immigrants Jose Luis Zacatelco, 29, and Gabriel Martinez, 27, who are both undocumented; and Martin Lopez, 22, who was born in California. They plan to arrive in Washington, D.C. on May 1, in time for the massive May Day immigrants rights rally planned for that day by a coalition of immigrants rights groups — including the National Immigration Forum and the Reform Immigration for America — who are calling for Comprehensive Immigration Reform.

“I’ve been working on [lobbying for] the DREAM Act for the last five years,” Ramos said. “Every year it has failed, I have seen the emotional toll on friends, and family members. Our lives are on hold, until we are all citizens… we had to do something drastic.”

IT’S PERSONAL: Though Marisol is a U.S. citizen, several of her relatives and close friends are undocumented. After learning about the DREAM Act five years ago, she helped found the New York Youth Leadership Council (NYYLC), a youth-driven grassroots group that organizes young people to lobby for immigration reform.

PACKING FOR JUSTICE: Marisol Ramos packs the belongings she will carry with her on the three week walk from New York City to Washington, D.C. She says she packed enough for seven days, including shirts, pants, waterproof clothing, insect repellents and a sturdy pair of sneakers. “We were told to pack light because we would be moving around, but I didn’t listen,” she said. 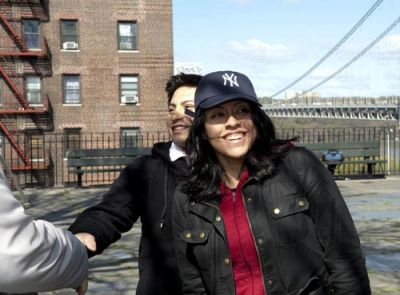 WASHINGTON HEIGHTS TO WASHINGTON, D.C. On April 10, Ramos (center) began her walk across the George Washington Bridge, the first 4,800 feet in a 250-mile walk to the nation’s capital. José Luis Zacatelco, 29 (left), is another member of NYYLC who will be participating in the walk. “It was a very chilly and windy day, but over 100 people from different groups and local high schools came out,” Ramos said.