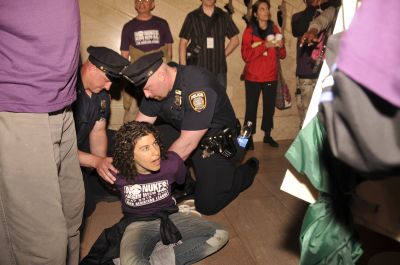 Twenty-two activists were arrested May 3 at Grand Central Station for dropping banners off the balconies of the main hall and staging a die-in.

Organized by the War Resisters League, the action declared Grand Central a nuclear weapons-free zone and called for disarmament here in the United States first. Wearing t-shirts that said “No Nukes Begin with U.S.,” the protesters handed out thousands of leaflets to rush-hour commuters and circled the information booth with a picket with large signs shaped like skulls with the names of all the nuclear-armed nations. Participants came from around the country and the world; they were in New York for actions relating to the Nuclear Non-Profileration Review Conference. 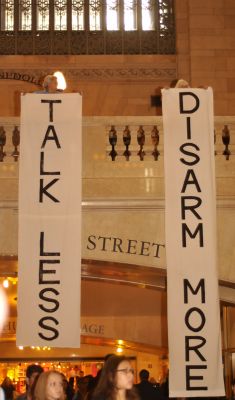 At 9 am, banners were dropped from the balconies at the west end of the large hall. One set read “Nuclear Weapons = Terrorism,” while the other urged “Talk Less, Disarm More.” After the banner-droppers were arrested, other protesters began to lie down by the stairs. They too were taken away by police, but everyone was released from custody by 11 am.

The day before, NPT Review 2010 International Planning Committee for Nuclear Abolition, Peace and Justice mobilized Disarm Now! For Peace and Human Needs, a march of 8,000-10,000 from Times Square to Dag Hammarskjold Place, where booths and tables were set up in a Peace Fair. A significant portion of the protesters came from Japan, the only country ever to have been the target of a nuclear attack.

The demonstration’s points of unity were: