A life sciences award administered by the U.N. agency UNESCO and funded by the President of Equatorial Guinea has stirred outrage among the exile community and human rights activists worldwide.

In a letter to the Paris-based UNESCO office, Tutu Alicante of EG Justice wrote: “We repeat our call for the $3 million that UNESCO has accepted from President Obiang to be applied to the education and welfare of Equatoguineans, rather than the glorification of their president.” The money could better be used, he said, to buy school books, benches and other supplies for the poorly financed primary school system.

The UNESCO-Obiang Nguema Mbasogo International Prize for Research in the Life Sciences is a $300,000 grant to be awarded to up to three scientists each year in the name of Equatorial Guinea’s allegedly corrupt and repressive ruler.

Equatorial Guinea is Africa’s fourth largest oil producer. Most health and quality-of-life indicators rank the country West African nation near the bottom, with life expectancy at around 50 years old.

Objections were first raised in 2008 by executive board members of the U.N. Educational, Scientific and Cultural Organization, said Alicante. More recently, UNESCO received communications from Equatoguinean human rights defenders, global civil society groups, scholars, and others to cancel the prize without delay.

“We hope you agree that a political leader with this record is not worthy of the positive endorsement of UNESCO,” Human Rights Watch wrote.  Nevertheless, on April 22 UNESCO informed governments that it plans to award the UNESCO-Obiang prize for the first time at the end of June 2010.

Jele, 35, was a member of the Swaziland Agriculture and Plantation Workers’ Union and the People’s United Democratic Movement (PUDEMO), Swaziland’s largest opposition party, banned under the government’s Suppression of Terrorism Act.

He was charged with wearing a T-shirt with the symbols of  PUDEMO.

According to police, Jele killed himself while in custody after being detained at a May Day labor event. But The Times of Swaziland reported that the activist was “found hanging from the rafters of a toilet” at Sidvwashini correctional facility.

In neighboring South Africa, the Congress of Trade Unions (COSATU) issued a call for a global mobilization to isolate the Swazi government. “It cannot be acceptable that workers should be arrested on their day, May Day, for wearing clothes of their choice or colors of their choice,” COSATU said. More protests are planned.

The kingdom of Swaziland is one of the world’s last remaining absolute monarchies. The government of King Mswati III is known for cracking down on political activists and pro-democracy campaigners.

Frederik Van Zyl Slabbert, a scholar, author and former member of the anti-apartheid opposition, died this week at age 70 during treatment for liver and other problems.

Before he died, he signaled the dangers of the growing gap between rich and poor. “I do know from talking to ordinary people that there is a great deal of anger at the conspicuous consumption of the new emerging elite,” the former leader said in a press interview.

Once the rugby-playing son of conservative Afrikaners, Slabbert turned towards multi-racial politics in the late 70s and 80s, opening up dialogue between Afrikaners and the exiled African National Congress. Later, with rights advocate Alex Boraine, he helped formed the Institute for a Democratic Alternative in South Africa, known as Idasa, to organize meetings between whites and blacks in apartheid South Africa. The group is now the Institute for Democracy in Africa.

Meanwhile, in an unscheduled visit to a Johannesburg slum, President Jacob Zuma said he was nearly reduced to tears when he saw a family’s living conditions in a shack he visited there. “You could swear no-one lived in that shack,” Zuma told premiers and ministers at the President’s Coordinating Council in Pretoria.

There is currently a 2.1 million housing backlog and more than 2,700 informal settlements.

After beating some of the fastest runners in the world, Haile Gebreselassie just fulfilled another dream – to open a sports resort in his home country of Ethiopia. 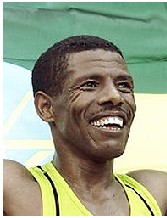 Sitting on the shores of Lake Hawassa, the resort is about four hours south of the Ethiopian capital of Addis Ababa, on land given by the southern regional government following Gebreselassie’s second Olympic title ten years ago. Work on the building began in 2006.

A long-distance track and road running athlete, Gebrselassie broke 27 world records and won numerous Olympic and World Championship titles, and is widely considered one of the greatest distance runners in history.

Close friend and greatest rival Paul Tergat, his younger Ethiopian compatriots Tirunesh Dibaba and her husband Sileshi Sihine, and New York Road Runners president Mary Wittenberg, were among the guests at the opening.

“Words can’t express my awe of Haile,” said Wittenberg. “The man is relentless, cheerful and patient with fans and friends while at the same driven to succeed and impatient with any effort less than the best.”

“If people are happy that’s the most important thing I need to hear”: Haile Gebreselassie.

Africa News Briefs are published by the Global Information Network.