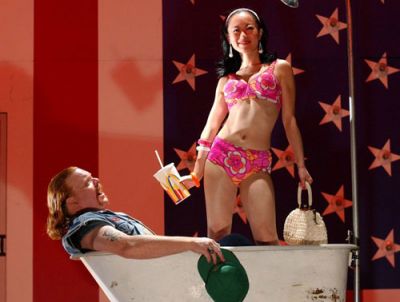 If you’re wondering just how to take in bobrauschenbergamerica, you might heed the words of Phil the Trucker, one of the play’s characters: “Everywhere I go, there’s something to see. I don’t know how I got so lucky. But here I am.” Showcasing Charles L. Mee’s kaleidoscopic inspiration of cultural references — and performed by SITI Company, its original interpreters (Mee is a company member) — bobrauschenbergamerica is a stunning tableau of dance, comedy, memory, feeling and storytelling. Mee has described the play as a vast, collaged landscape that captures “the sheer exhilaration of living in a country where people make up their lives as they go.” It’s an approach that both Mee and the play’s namesake, postmodernist artist Robert Rauschenberg, knew intimately. But what can, or should, an audience make of an experimental theater piece like bobrauschenbergamerica?

I saw the show with a friend who asked me before it started, “Will I be missing something if I don’t know a lot about Bob Rauschenberg?” Curtain up, it soon becomes clear that Rauschenberg informs the play from an oblique angle, casting the form, rather than the direct content, of the play in his image. Rauschenberg’s vision, like Mee’s, was most famously expressed in the “making-it-upas- you-go” technique of collage. Rauschenberg brought collage into three dimensions, juxtaposing everyday objects like pieces of luggage with more bizarre elements, such as taxidermied animals, to uncanny effect. Bobrauschenbergamerica is a collage of a play, a mosaic of the human experience: a character’s vision of a movie is followed by a line dance, which is in turn followed by a monologue about love.

Directed by Anne Bogart, SITI Company’s production at Dance Theater Workshop delicately teases out the narrative threads in this collage, particularly in some of the romantic relationships that emerge. Mee gives the characters of two different relationships the same lines, imbuing identical sentences with essentially different meanings that shift the mood of the scenes like a change in lighting. Other productions have used these words to suspend relationships in ambiguity; under Bogart’s direction, they hint at resolution. Yet this unusual character development is just as important to the play as a whole as are the delightful, seemingly non-sequitur moments that change nothing, such as a man in a chicken suit crossing the stage, or Phil the Trucker, played by a charming Leon Ingulsrud, telling jokes. 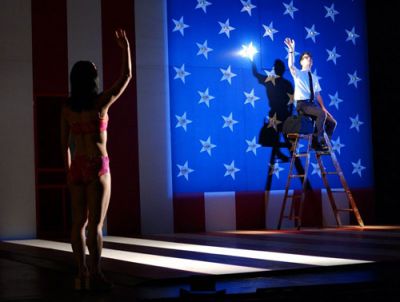 Bogart, a vanguard of the avant-garde theater, is one of the early practitioners of Viewpoints, a method of working with and thinking about theater that encourages players to focus on immanent, but often neglected, theatrical elements such as spatial relationships, tempo and duration in speech and movement. This isn’t what is typically considered “acting technique;” rather, it is a tool for exploring a performative text. We can detect the Viewpoints influence in Bogart’s bobrauschenbergamerica when Allen, played by Will Bond, is describing the sky and weather. Each time he mentions the heavens, he gestures to the sky with a wave of his arm; and each time, another character walks on stage and waves at him in unison. The movement turns a somewhat abstract monologue into a concrete, almost textured mode of communication, like smoke signals, that reveals a certain understanding amongst the ensemble of characters and in which the audience, the witness to that understanding, participates.

So what can you take away from a play like this, one with hints of story and no clearly discernible moral, a play whose characters delight in spontaneous changes of motivation, one without an apparent climax? You make it up as you go, and you take away whatever you want to — or whatever you just can’t shake. That’s where America figures into bobrauschenbergamerica — aside from the more obvious gestures like a giant American flag set, that is: It’s a play about the question of freedom, the freedom inherent in the act of questioning, and the ability to take the aspects that ring true, laugh at the ones that ring false, in the creative quest to reinvent the human experience over and over again.

SITI Company’s production of bobrauschenbergamerica is presented as part of Dance Theater Workshop’s Guest Artist Series, a subsidized, curated rental program serving a wide range of dance and performance artists from around the world. The play runs through May 16, with post-performance talks on selected dates. Visit dancetheaterworkshop.org or for details.