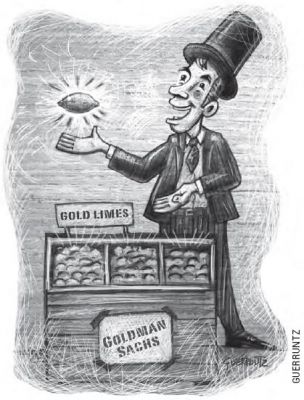 Everyone is down on Goldman Sachs. The recent New York Post headline said it all: “Sachs of Sh*%t!”

As a teacher of business ethics, I am most curious about the reasons for our anger and what they say about our visions of a just economy. Ultimately, I see our anger as an expression of what Americans are not typically thought to embrace: collectivism. Here’s why.

There are roughly two, very different, sorts of concerns with Goldman’s actions. One is a thin concern and the other a thick one.

The thin view is expressed in the singleminded focus on whether Goldman committed fraud. The Securities and Exchange Commission (SEC) has charged that it did when it created and sold a collateralized debt obligation specifically designed to lose value. Goldman then bet that the investors would lose and, when they did, Goldman cashed in.

Clearly, Goldman withheld relevant information from its investors. But was there fraud here? Maybe not. Goldman CEO Lloyd Blankfein defended his company’s behavior before a congressional committee the other day, arguing that it gave its investors exactly what they were looking for. He said, in effect, that Goldman employees never said anything objectively false to investors about the product they were selling. All they did was fail to tell investors the company’s opinion of the investment-worthiness of its products. If true, that’s not fraud. It’s morally equivalent to a car salesperson who fails to point out that a car is a lemon. This may be sleazy, but it’s not fraudulent. The investors, just like the buyer of the lemon, were gullible, and Goldman played them for all they were worth.

If our only concern is whether Goldman committed fraud, then we are implicitly accepting the thin view of Goldman’s duties. I call it the thin view because it is grounded in an individualist vision of economic justice. In this picture, the economy is simply an arena where individuals battle for possession of private spoils. There is no social purpose to the economy; all that matters is whether individuals obtain their spoils fairly. And here “fairly” just means without defrauding, threatening, or robbing anyone. For the thin view, so long as you don’t do these things, anything goes.

So what if it turned out that Goldman did not commit fraud? Would we be ready to forgive them? I’m confident we would not.

This means that most people don’t accept the thin view and its vision of the just economy as simply an individualistic capitalist battlefield.

In fact, most people are mad at Goldman for reasons other than the appearance of fraud. The New York Times got it right when it recently wrote that people are angry at Goldman because it profited while the rest of the economy suffered. Indeed, it appears that in many ways Goldman profited because the economy suffered. This is exactly what the company did in the deal that drew the SEC’s attention. It sold garbage that threatened not only investors but the global economy, and it did so for the express purpose of cashing in on the destruction.

Now, why would this make us mad? I’m sure bankers would insist that we’re just jealous. Because we are getting poorer while they are getting richer, we resent their success.

That would be convenient for them if it were true, but I think there is much more behind our anger than envy. Indeed, I think our disapproval reveals a commitment to a very old, sophisticated and powerful vision of economic justice.

The fact that we are mad that Goldman and other bankers have gotten rich while we have gotten poorer tells us that we implicitly believe that banks should get rich only when we do too. The bankers and we should share one economic fate.

This brings us to the thick view. The reason we think our interest should dovetail with the bankers’ is because we implicitly accept two basic principles of economic justice. First, the economy should be treated as a cooperative endeavor where we all contribute to each other’s lives. The economy ultimately belongs to all of us and should be structured to best serve the common good. The economy has a clear social purpose and we expect every participant to serve that purpose. That Wall Street is treating the economy as an individualistic battlefield is therefore precisely what people object to. We think bankers should not prey on the rest of us, but, on the contrary, should contribute to our well-being.

The second principle is that people should only be allowed to use the economy to their private advantage when doing so serves the common good. Because the economy belongs to us, we reserve the right to structure the economy in whatever way we think will best serve the common good. We give individuals permission to engage in for-profit activities; it is not their right. We have allowed bankers to make private profits only because we thought it would be best for us if they did. This is why we are so pissed that they are profiting by harming us. They are not serving their social purpose.

It might be surprising to some that the thick view is still a part of our moral sensibility. Once it is revealed, some might even wonder whether they should give up on it as some sort of anachronism. They should not. The thick view is an appropriate way of looking at the economy and it is the only view that will ground a struggle to take back control of it.

We should be unafraid of thinking of the economy as ours, as something to be used for our sake as a people. Then, we should ask bankers (and insurance companies, landlords, private schools and any for-profit industry), “What good does it do us to allow you to profit from what you do?” If it cannot be shown that it does us good, then permission to make profit should be revoked. These activities should be regulated or socialized, whichever serves us best.