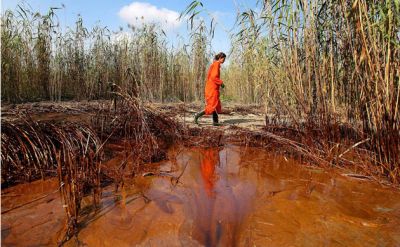 April’s BP Oil Spill in the Gulf of Mexico has dominated the media for the last few weeks, but the coverage has focused primarily on impact to wildlife and who’s going to pay for the cleanup. For an update on what’s going on with the spill right now, check out these alarming figures reported by Mother Jones Magazine. These interactive maps from The Guardian and USA Today show how the spill has grown since April 20.Here at Hesperian, we’re disappointed that the mainstream news coverage has failed to talk about many of the vulnerable populations that will be impacted by this catastrophe – including the workers and volunteers who are involved in the cleanup. They will be coming into contact with a broad array of toxic and carcinogenic substances that make up the oil, the dispersants used to break up and sink it, and the chemicals used to “clean” it up.

While some reports are clueless regarding the risks to workers – a USA Today article by Elizabeth Weise quotes a Tulane University toxicologist who says, “Oil spills are ecological events, not human health events” – others are quite clear about the potential hazards.

Journalist Elizabeth Grossman recently reported in The Pump Handle that there are an estimated 27,500 responders and volunteers currently involved in the cleanup. Her article, “As We Rush To Protect the Gulf Coast Environment, are Responders Being Protected?” identifies several areas of concern, including that workers and volunteer may come in direct contact with toxic chemicals or fumes. In addition, boats belonging to fisherman and other locals who are aiding in the clean up through the Vessels of Opportunity program might become contaminated, too.

Although agencies are now slowly starting to acknowledge these risks, another big question is whether protective gear is available to workers, volunteers, and residents – and who is paying for it? Grossman also questions the funding and implementation of long-term health issues and monitoring. And, as yet, no organization has provided for mental health care for responders or residents.

The USA Today article also points out that it’s difficult to learn from past catastrophes, like the 1989 Exxon Valdez spill, because health information is often “sequestered,” or kept private because of court settlements. Weise quotes a National Oceanic and Atmospheric Administration official who says, “The people who got sickest and won against Exxon got settlements that required that the records be sealed.”

Grossman reports that though the National Institute of Environmental Health Sciences (NIEHS), the Occupational Health and Safety Administration (OSHA), and the National Institute for Occupational Safety and Health (NIOSH) are involved, they are working in partnership with the polluter. She quotes a NIEHS official who says about such a partnership: “I don’t think that has ever happened before.”

Grossman continues, “Among the many challenges to worker safety are the exemptions from hazardous waste operations and emergency response (HAZWOPER) standards OSHA allowed during the Exxon Valdez response – exemptions BP is now operating under. Standard HAZWOPER training is 40 hours; the exemption allows a 4-hour course.”

Although this abbreviated training is being offered, in the first few days after the spill BP attempted to shirk responsibility for funding and/or providing this training to local fisherman working to aid the cleanup. They asked boat owners to sign an agreement waiving this requirement until a lawsuit by area fishermen forced BP to stop using the agreement.

Public Citizen says, “BP is a London-based oil company with the worst safety and environmental record of any oil company operating in America.” Their article lists BP’s many worker safety and environmental fines and violations, which have required them to pay over $730 million in fines and settlements to the U.S. Government, state governments, and in civil suits, including OSHA’s two highest fines ever.

BP has said that it will pay for the cleanup, but there is currently a blame war going on where various companies fight about whether responsibility lies with BP, the company who actually owned the Deepwater Horizon rig, and the company that manufactured some of the equipment involved.

And what BP will eventually pay is unclear. This article from the Guardian says, “A 1990 law passed in the wake of the Exxon Valdez oil tanker spill in Alaska makes responsible parties liable for cleanup costs from oil spills but limits to $75 million their exposure to other kinds of claims. The administration did not propose a new figure for the liability limit, but Democrats have introduced legislation raising the limit to $10 billion.” The same article quotes White House energy adviser Carol Browner: “We take BP at their word. They say they intend to pay for all costs. And when we hear ‘all’ we take it to mean all.” But whether the White House will receive the legislative backing to make that happen, and even continue to maintain the spine to demand it, are both open questions.

Mike Brune, Executive Director of the Sierra Club, has called out BP for their attempt to minimize the catastrophe: “BP… is running an expensive public relations campaign in an attempt to mask the full extent of the damage in the Gulf and minimize their accountability. Anyone who is here in the Gulf, talking to residents and seeing the oil on the water, knows that the impacts of this disaster can’t be minimized. BP needs to be accountable for every penny of the response effort and for every job lost.”

What can you do?

National environmental groups are connecting the BP spill with the U.S.’s dependence on fossil fuels, saying dependence on coal, oil, and natural gas is not healthy or safe. Many groups are calling on President Obama to move the U.S. toward a clean energy future.

Although environmental groups are split on whether to support the newly proposed American Power Act (The National Resources Defense Council just released this advertisement featuring Robert Redford supporting the act, but Rainforest Action Network posted a hilarious video opposing the same legislation) – one thing is clear – everyone supports reducing dependence on fossil fuels.

Lots of organizations are making it easy for you to talk to legislators about the oil spill. The Sierra Club has a whole site dedicated to this issue. You can use this online form from Greenpeace to easily send a note to your representatives or this form from Rainforest Action Network to contact President Obama. You can also sign a petition asking for a ban on offshore drilling, coordinated by 350.org.

This article originally appeared on Hesperian.org.