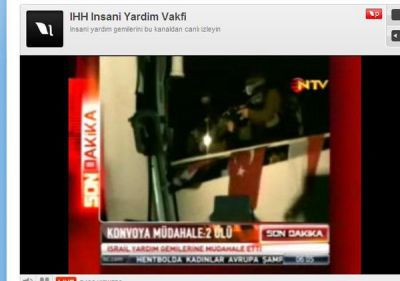 UPDATE:  Greta Berlin, an organizer with the Free Gaza Movement, has just told Al Jazeera English that their lawyer in Israel has told them that 10 people have been killed as a result of the Israeli attack on the “Freedom Flotilla” aiming to break the Gaza blockade.  See below for more:

The Israeli Navy has reportedly attacked the Turkish boat that is part of the “Freedom Flotilla” loaded with humanitarian aid and 600 Palestine solidarity activists. The flotilla was heading towards Gaza in an attempt to break Israel’s blockade.

A “tweet” from the Free Gaza movement, one of the organizations that headed the flotilla, reports, “At about 4:30 am, Israeli commandos dropped from helicopter onto deck of Turkish ship, immediately opened fire on unarmed civilians.”

According to Turkish television, at least two people have been killed and dozens, perhaps up to 50, have been injured.  Those injured may include European parliamentarians who were traveling with the boat.

(These are reports that are coming from Twitter, so keep that in mind, but the English version of Al Jazeera has an article up titled “Israel ‘attacks’ Gaza aid fleet.”  See here for live reports on Twitter from the topic #flotilla).

Protests are being called for across the country and the world.  In New York, according to several sources, a protest has been called for 3 p.m. Monday in Times Square.

The six boats were reportedly in international waters at the time of the Israeli attack.

For a live stream of what appears to be Turkish news television broadcasting reports and images from the Turkish boat, click here.