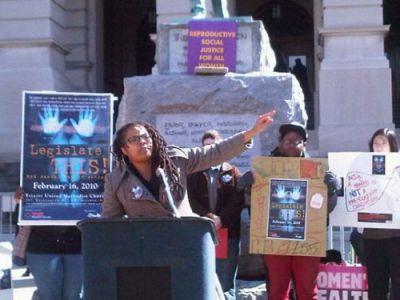 In the April 26th issue of Newsweek, Sarah Kliff ignited a firestorm of debate with her article “Remember Roe!”, asking, “How can the next generation defend abortion rights when they don’t think abortion rights need defending?” In the still-choppy wake of the healthcare reform bill’s passage — made possible in part by a compromise of reproductive rights that bans federally funded abortion coverage — Kliff’s question reopened a debate that harkens back to the 1970s and that, perplexingly, is still defined in narrow terms that fail to represent most women.

What sent the Newsweek article ricocheting across the blogosphere was Kliff’s citation of a NARAL study in order to argue that reproductive rights are vulnerable because the younger generation of pro-choice feminists is indifferent to the cause of protecting those rights. The study found that fewer abortion-rights supporters considered the issue “very important” than their pro-life counterparts, and that pro-life advocates more successfully harnessed their supporters’ fervor. Kliff hitched her citation to NARAL President Nancy Keenan’s anecdotal observation that [Keenan] “just doesn’t see a passion among the post-Roe generation” of pro-choice women.

The post-Roe generation reacted swiftly, snuffing any doubts about their “passion for the cause.” Within hours of the article’s publication, the Twitter stream #fem2 (for “feminist 2.0”) accumulated responses from young activists railing against Kliff’s reliance on a limited study and subjective corroboration from the feminist establishment. “Note to Older Feminists: WE EXIST!” announced a post on AbortionGang.org, a blog run by young reproductive-rights activists. Young representatives from organizations like Choice USA and the National Organization of Women (NOW) weighed in; a Twitter petition called for Newsweek to interview young activists; and the reaction snowballed as mainstream websites like Feministing.com and Gawker Media’s Jezebel.com joined the chorus.

Yet an important point was lost in the debate: it wasn’t only younger women that were disregarded by traditional organizations like NARAL. The reality is that any constituency that doesn’t fit the Feminist profiled defined by white, upper-middle-class champions of the 1970s women’s movement is excluded from the discourse. The mass of rejoinders to Kliff’s article had forgotten third-wave feminism, the vital contributions of bell hooks and Chandra Talpade Mohanty. Women of color and low-income women were simply absent from NARAL’s study and the subsequent debate; so this great opportunity for a reevaluation of feminism and the reproductive-rights movement was squandered.

It is well documented that abortion rates are much higher within minority communities; the rate among black women is more than five times that of white women. The pro-life contingent uses these statistics to inundate African- American communities with media campaigns claiming that family planning organizations like Planned Parenthood are colluding in a program of population control. “Black Children are an Endangered Species,” proclaim billboards erected throughout Atlanta by Georgia Right to Life. Right to Life obviously thinks it important to reach communities of color, so why does direct engagement with these audiences still elude prochoice organizations like NARAL?

These same billboards — and the Georgia’s Senate Bill 529 that accompanied them, criminalizing abortion “solicitation” to women of color — were vigorously opposed and ultimately defeated by a coalition of reproductive-justice organizations run by women of color. SisterSong, SPARK Reproductive Justice Now! and Sisterlove mobilized a successful campaign that killed the bill before it went to a vote. “We truly raised the voices of women of color,” said Heidi Williamson, National Policy Coordinator for SisterSong. This is the passionate, triumphant voice missing from the Newsweek article debate.

There are many other minority-run reproductive-justice organizations across America. Desiree Flores, Program Officer at the Ms. Foundation for Women — a national non-profit that funds many such organizations — says their innovative tactics ensure the health of the movement: “They’re bringing people traditionally written off as unlikely allies or lacking political power into the reproductive- rights movement,” and their message goes “beyond ‘pro-choice’ or ‘pro-life’ in order to reach … people for whom these terms are outdated.”

As the dynamics of race, class and labor in America continue to change, it’s imperative that the voices of minority and low-income women be heard in the reproductive- rights debate. Only then will the movement reflect all the dimensions of justice that belong to a feminism for our times.