On the May 14 episode of Down Home Radio, host Eli Smith speaks with Clifton Hicks, a talented young banjo player from Florida and Georgia who now resides in Boone, N.C. Hicks is a protégé of George Gibson, an older Eastern Kentucky banjo player who is the living link between the old mountaineers and a younger generation of talented southern traditional musicians, such as Hicks. 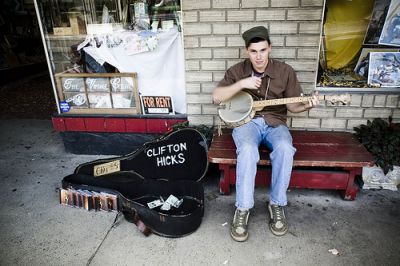 In this interview, Hicks speaks about his family background and introduction to the music, provides thoughtful notes on his style and technique and plays a bunch of tunes live on the show.

Hicks also discusses his experiences as a soldier in Iraq, which ultimately led him to oppose the war and get involved with Iraq Veterans Against the War (IVAW). He detailed his experiences in Iraq on March 21, 2008, as part of the Winter Soldier Project, which was organized to capture testimonials from U.S. military members who participated in the Iraq and Afghanistan wars. To listen to the Down Home Radio interview, click here.

Hicks will perform Saturday, May 22 at the Jalopy Theater, 315 Columbia Street in Red Hook, Brooklyn, as part of the Brooklyn Folk Festival (May 21-23).

Eli Smith (host/producer) is a banjo player, writer, researcher and promoter of folk music living in New York City. He plays in the old time string band, The Dust Busters, as part of the Roots ‘n’ Ruckus music collective, and hosts Down Home Live, every second Saturday of the month at Banjo Jim’s on Manhattan’s Lower East Side.