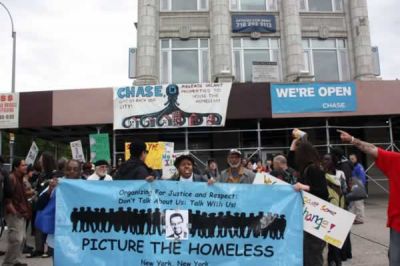 May 19, 2010, New York, NY —Wednesday, on the anniversary of Malcolm X’s birth, the community organization Picture the Homeless and its Housing Not Warehousing Coalition orchestrated three banner drops. Transgressing into vacant buildings in Brooklyn and East Harlem in the early morning, they dropped banners that read “Homes Not Shelters / Casas No Refugios,” and “Let Housing Bloom…berg.” After an afternoon community concert and rally in the Bronx, they marched to a Chase Bank, from which a third banner-drop read, “Chase: Give us Back Our City!   Release Vacant Properties to House the Homeless!” The activists’ presence forced the bank to close-up an hour early.

The day of action comes soon after Mayor Bloomberg installed Seth Diamond as the new Homeless Services commissioner, bringing media and community attention to the administration’s entrenched policies as failed, counter-productive, and cruel towards struggling New Yorkers. The homeless-membership-led grassroots organization Picture the Homeless has long asserted that the many vacant buildings and lots in New York City are a great potential stock of properties to create truly-affordable housing for low-income New Yorkers. PTH is currently advocating for the pending city council legislation Intro 48, which would mandate that the City conduct and publicize an annual census of vacant properties.

The vacant buildings used for the banner-drops are located at 2106 Third Avenue between 115th and 116th Streets in Manhattan, and 24 Bartlett Street between Harrison and Throop Avenues in Brooklyn. The East Harlem building is currently owned by the Starwood Corporation, and has been vacant since 1985. The Brooklyn building has been vacant since 1979, and is held by JPMorgan Chase, the target of a PTH corporate campaign focused on transferring Chase’s vacant, un-used properties into a community land trust for housing for the homeless. The Chase branch the activists marched to is at 270 East 137th Street in Mott Haven.

PTH’s members, supporters, and community allies rallied Wednesday afternoon at Brook Park in the Bronx—not far from the PATH office, where families in need of emergency shelter go. Homeless members of PTH highlighted the citywide housing issues facing all community organizers these days. There were several performances, including by the Bronx-based hip-hop crew Rebel Diaz, and a fresh, full meal was served to all attendees.

PTH member and shelter resident Arvernetta Henry: “Commissioner Diamond needs to know that for people entering the shelter system—it’s horrifying what you go through. Children’s education and adults’ jobs being disrupted and disrespected, adults being told what time to go to bed… You get stuck in the system without the real programs any of us would need when we’re facing hard times. The city pays more to keep someone in shelter than the cost to rent an apartment! Everyone deserves their own space, the dignity to have your own home.”

PTH member Alease Lowe: “Today we are here for our direct action campaign—to lay claim to the housing we all so rightfully need and deserve. We need to end policies in this city that prioritize condos over communities, and a billion dollar shelter system over decent housing programs. Homelessness is not a crime, though we often face bogus ‘disorderly conduct’ tickets for no good reason. Housing is a human right. We’re putting pressure on JPMorgan Chase, which got $25 billion taxpayer handout—because they’re holding onto vacant buildings and lots around the city that are put to no use, while so many people here need a place to call home.”

On Malcolm X’s birthday, PTH members recalled his words: “I for one believe that if you give people a thorough understanding of what confronts them and the basic causes that produce it, they’ll create their own program, and when the people create a program, you get action.”

For more information from Picture the Homeless, visit picturethehomeless.org/blog.