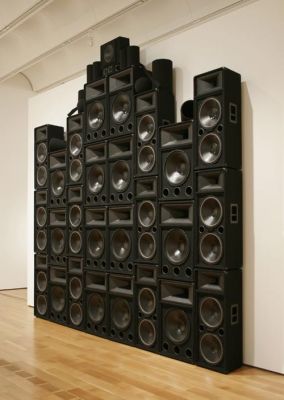 The stereo speakers, arranged together in an altar-like presentation, emit murmurs of some garbled, holy tongue. Each has a lacquered black bull’s-eye at its center — a locus of power and energy. This sound sculpture, “Coronation Theme: Organon” by Nadine Robinson, takes formal cues from a southern Baptist church and a 1963 civil-rights demonstration. But whether you know that has no bearing on the tremulous and wholly American sense of faith it projects.

The work is part of “After 1968,” a show that traveled to the Bronx Museum from the High Museum in Atlanta, Ga., in which African- American artists — all born after 1968 — reflect on the legacy of the American civil-rights movement (“Road to Freedom,” an exhibition of classic civil-rights-era photos, is on view in the room next door). In many ways, it’s a show about absence: things left unsaid or undone. Leslie Hewitt’s photographs — assemblages of tattered paperbacks, sun-bleached snapshots and shaggy domestic details — play as elegies for urban childhoods in late 20th-century America. Her work is compelling but can frustrate, too, much like Deborah Grant’s collages, in which yellowed newspapers and Basquiat scribbles float on panels of juicy Stalinist red: it draws your eye but leaves the gaze with a certain inertia.

Meanwhile, the collective Otabenga Jones & Associates have created an education-activity kit that will be distributed in public schools. The kit pointedly calls attention to the history of the Black Panther Party: a group that has been smeared in the popular imagination as a cabal of hot-blooded, gun-toting thugs with a naïve rebellious streak. The other story is that of a national political party that provided free meals and job training in poor communities. By bringing the Black Panthers into public schools, the project is both path-worn nostalgia and bold contemporary praxis. 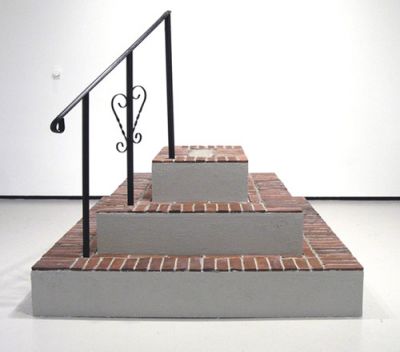 Hank Willis Thomas’ “Unbranded” shows selected cuts from the last 40 years of Black representation in mainstream advertising. You can imagine the advertisers congratulating themselves for such progressive images — a vacationing Black couple being served by a solemn white waiter, a lithe Black woman curling her naked body behind ivory-white household soap products. Thomas reminds us that when it comes to advertising — that is, money, status and power — identities are always appropriated and race is ever-present. 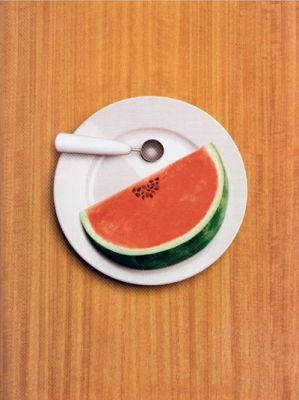 A few subway stops away, the Studio Museum is showing “VidéoStudio: New Work from France,” featuring recent work by three video artists, each raised in North Africa and educated in France. In Bouchra Khalili’s “Straight Stories — Part 1,” we hear the testimonials of Moroccan immigrants living in Europe, while we watch grubby footage of ferries and rocky borders; we don’t see the person talking. Khalili’s video amplifies the presence of race and ethnicity by hiding it: it meditates on the ways that personal identities are woven into political and social realities. Yto Barrada’s “The Magician” is a bare-bones performance- documentary — two Moroccan men pulling ribbons from their mouths and doing tricks with live roosters. African men creating imagined realities in a distinctly European idiom; Barrada doesn’t want us to judge or quantify anything — she just wants us to think about race as a pervasive source of meaning.

In all of this artwork, there’s a sense of locating and engaging with power. “After 1968” ends with Adam Pendleton’s work: dark, austere, self-consciously artsy paintings. Of course this work is about race, politics and revolution. How could it not be?

“After 1968: Contemporary Artists and the Civil Rights Legacy” will run until Aug. 11 at The Bronx Museum of the Arts at 1040 Grand Concourse at 165th Street. “VidéoStudio: New Work from France” is exhibited at The Studio Museum in Harlem, 144 West 125th Street, until June 27.