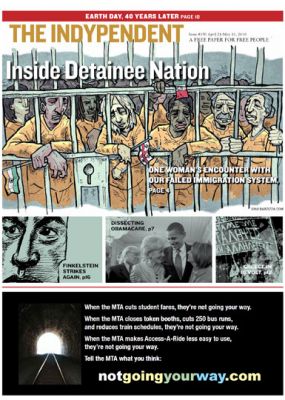 PRIVATIZED PRISONS ARE REAL THREAT
Response to “‘Everything Is Not Fine’: The Immigrant detention system is ruining the lives of innocent people,” April 21:

Underlying the issue of detaining undocumented immigrants is the far more serious issue of privatized prisons. They are done for profit, not for public service. There is no accountability. I first visited prisoners at the CCA jail in Indianapolis, Indiana. When CCA first came to Indianapolis it was full of promises, such as making sure the staff was trained. However, we saw that deteriorate within a few months. Guards became lax and careless. Visitor procedures were not maintained carefully, and when we visited monthly there were always new guards. Government-run prisons run the gamut of criticism, but there are no positive words for privatized prisons. They’re inherently evil and not what I want my tax dollars to support.
—Anonymous

A public option was not enough and will not be enough. But single payer advocates need to shift their emphasis. It is apparent that the opponents of healthcare reform are not moved by tales of economic and physical heartbreak from the victims of the current health care system. Yet this “reform” threatens to produce an even more fragmented “patient delivery system” that will result in even more vulnerable populations. Employers need to be persuaded that they need to abandon the employer based model as a portal into the healthcare delivery system in favor of a more coherent and rational financing and patient delivery system. It is in their economic interests, their human capital interests, and ultimately in the interests of the U.S. economy.
—Jimmy1920