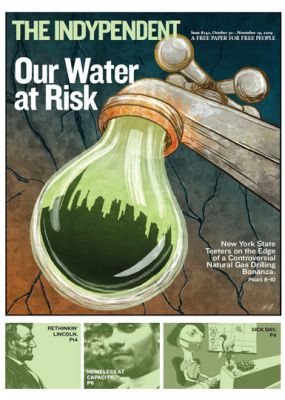 As oil continues to spew into the Gulf of Mexico, New York residents worry that a disaster of similar magnitude could happen closer to home.

Jereski is just one of the thousands who oppose permitting energy companies to drill for natural gas in deep shale formations in New York using the controversial hydraulic fracturing practice (“hydrofracking”), which uses water, sand and a proprietary cocktail of chemicals under high pressure to crack shale formations to release the gas. Environmentalists continue to organize for a statewide ban on this type of natural gas extraction despite a few recent small victories.

On April 23, the New York State Department of Environmental Conservation (DEC) announced stricter permitting requirements for shale natural gas drilling in the watersheds of Syracuse and New York City. While the extra requirements could result in no new drilling in the Catskills and Skaneateles Lake watersheds, environmentalists and local politicians feel the entire state should be protected.

“We’re going to fight them tooth and nail,” Jereski said, “We’ll make an example of any politician or corporate environmental organization who would betray our upstate allies by supporting special protected status for the water downstate, playing into their divide and conquer strategy.”

The U.S. Environmental Protection Agency pledged in March to conduct a $1.9 million two-year nationwide study to evaluate the risks to drinking water supplies posed by the hydrofracking extraction process. The Marcellus Shale formation, which extends down to 7,000 feet below ground from New York to Tennessee, is believed to be the world’s largest natural gas reserve. A long list of accidents, explosions, water and air pollution and health complaints have been documented in eight other states where shale fracking is ongoing.

Energy companies are itching to get access to New York reserves. “We have shifted our focus to our next important project, the Marcellus Shale prospect in New York,” said Zoran Arandjelovic, a top executive at Epsilon Energy Ltd., in a May 10 press release about the company’s second quarter earnings. “We are ready to ramp up our operations in New York when the moratorium on conducting hydraulic fracturing for the extraction of natural gas is lifted.”

Environmentalists are supporting two bills in the New York State Assembly. A. 10490 would impose a ban on hydraulic fracturing until 120 days after the findings of the EPA study is released. A. 10633 would give towns the authority to pass local ordinances to regulate gas drilling.

More than 2,800 people have signed an online petition organized by Catskill Mountainkeeper to encourage the DEC to hold off issuing its Final Supplemental Generic Environmental Impact Statement on the Oil, Gas and Solution Mining Regulatory Program until the EPA study is complete. The DEC aims to streamline the environmental review process for new drilling permits.