Imperiled subway-station agents won a reprieve from massive layoffs late Wednesday night, but their jobs are still in danger.

State Supreme Court Justice Alice Schlesinger issued a temporary restraining order barring the Metropolitan Transportation Authority from laying off 487 agents until a court hearing on Monday afternoon, May 10. The layoffs, scheduled for Friday, would have eliminated more than one-sixth of the system’s station agents.

The Transit Workers Union is arguing that the MTA, which ordained the layoffs 18 months ago, did not give the public enough time to comment on them, says TWU spokesperson Alan Saly. The union also contends that station agents serve a vital security purpose, and that the March suicide bombings in Moscow subways and last month’s conviction of an al-Qaeda plotter against New York’s system constitute new evidence of this need. Agents call in more than 400 emergencies a day, Saly adds, from sick passengers to lost children to suspicious packages.

Station agents are “the first level of security in the transit system,” says TWU director of organizing Charles Jenkins. The MTA, he explains, has been trying to eliminate them in favor of since the MetroCard was introduced more than 10 years ago, but “since that plan was implemented, there was 9/11. They should go down to Cortlandt Street and be reminded of why that station is still closed.” 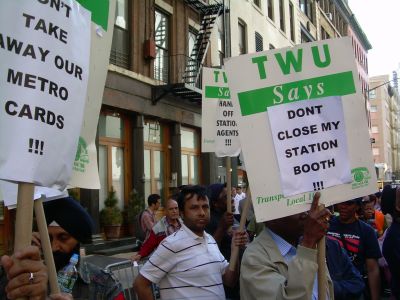 Jenkins was among about 60 TWU members who picketed Thursday afternoon outside the home of MTA director Jay Walder, in a luxury high-rise in Tribeca. Some came straight from work, in their MTA uniform caps. Others wore Rastafarian tams and Yankees caps, Sikh turbans and union bandannas. They sang “we are the union/ Mike Quill’s union” and chanted “How do we kick the boss’s ass? Mobilize the working class.”

The workers were well aware of that. If the layoffs go through, they will wipe out the jobs of all agents with less than six years’ experience. And the MTA, trying to shrink a $378 million deficit, also plans to cut 750 bus drivers.

“This is not a joke,” says Navinder Singh, 46, who works in the Fifth Avenue/53rd Street station. “They’re playing with our lives.”

Singh, an immigrant from India, has worked for the MTA for two years, so he is one of the agents facing a layoff. Ironically, he quit a job at a jewelry company after 14 years because he thought a government job would be secure. He bought a house in Queens immediately after he was confirmed as a permanent worker. He has a $1,300-a-month mortgage payment.

“I have no idea what I’m going to do,” says Sabrina Greenwood, 38, a station agent from the Bronx with five years on the job. She is an “A.M. extra,” going to different stations to fill in for agents who were out sick or on vacation. She has four children, with the oldest one in college.

“We are the deterrent from crime,” she says. A camera can only tell you what happens after the fact. A machine can’t do what a human presence can.”

While the MTA is trying to lay off hundreds of workers, she adds, it has several ads for managerial positions posted on its Web site-all with six-figure salaries.