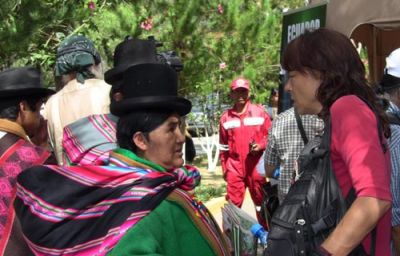 TIQUIPAYA, Bolivia — Bolivian President Evo Morales spoke for many developing nations last December when he rejected the United Nation’s Copenhagen Accord as “an agreement reached between the world’s biggest polluters that is based on the exclusion of the very countries, communities and peoples who will suffer most from the consequences of climate change.”

Many of those most disappointed in the talks were enthusiastic participants in the World People’s Conference on Climate Change called by Morales from April 19 to 22. With an emphasis on the inclusion of indigenous voices and the “rights of Mother Earth,” people from over 120 nations and organizations gathered in Tiquipaya, on the outskirts of Cochabamba, to debate how to confront the climate crisis.

“We are here to establish a different position that maybe will influence the processes in the future,” said Vera Mugittu, a representative of the Pan-African Climate Justice Alliance, “so that Africa can have a better deal.”

That deal was developed during four days of intense meetings among 17 working groups, where genuine dialogue was encouraged. Topics varied from the rights of Mother Earth and harmony with Mother Nature to climate debt and climate justice. “Whether we agreed or whether we disagreed, it didn’t matter,” said Shetal Shah, who worked with the Bolivian Mission to the United Nations to organize the summit, “we’re having the dialogue.”

Bolivia — a multiethnic socialist state — shaped the talks by fostering a critique of the capitalist system and its push for market- based solutions to solving the climate crisis. “Either capitalism lives or Mother Earth lives,” said Morales on the opening day of the summit. Many participants agreed. Projects to protect the environment “cannot ignore the structural changes that have to happen,” said Ruth Kaplan with the Alliance for Democracy. “Otherwise, it’s like rearranging the deck chairs on the Titanic. And yes, it’s a revolution and we need that kind of revolution.” 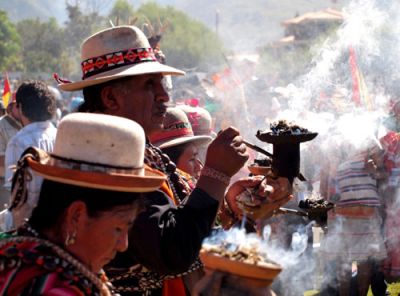 Other participants argued anti-capitalist rhetoric would stall progress in negotiations with wealthy countries. “The climate change movement needs to be an environmental movement” and not a social revolution, said Adam Zemans, director of Environment Bolivia. He said trying to overthrow capitalism while combating climate change is “counterproductive.”

Many of the working groups benefited from learning about regional struggles, and became more familiar with the diverse points of view held by their colleagues. While not in total consensus on all points, they reached agreements that will be useful rallying points for future climate talks.

An unofficial working group, known as Table 18, included a critique of Bolivia’s strategies for economic development that include mining and drilling for oil and gas. Among the participants were residents of Salar de Uyuni, who were protesting a transnational mining company at the same time of the conference. The group’s final agreement questioned “predatory and consumerist logic — the logic of death based on developmentalism and neo-extractivism.”

There was general support for the creation of an International Climate and Environmental Justice Tribunal. The tribunal would punish states, transnational corporations or people who violate agreements like the Kyoto Protocol, which currently lacks an enforcement mechanism. However, such a tribunal would require deep reform within the United Nations, leading some to favor an arbitrative body that would resolve disputes over biodiversity, fresh water access, habitats and health.

Ultimately, the People’s Agreement presented at the conference’s closing ceremony identified the capitalist system in wealthy countries as the main driver of climate change. It called for restorative justice through an Adaptation Fund — financed by 6 percent of the Gross Domestic Product of developed nations — that would assist countries in dealing with the impact of climate change. This includes reduced food security, the loss of water due to retreating glaciers, more frequent and intense “natural” disasters, an increase in mosquito-borne diseases, and more forest fires. The agreement also demanded the reduction of greenhouse gas emissions to a level that will prevent global temperatures from rising more than two degrees Celsius.

“By aggregating the voluntary commitments in the [failed] Copenhagen Accord, we are talking about a temperature increase of at least four degrees,” said Nnimmo Bassey, chair of Friends of the Earth International. That “increase in temperature clearly means a death sentence to Africa, to the small island states, to the Arctic states and to all the vulnerable nations.”

After the World People’s Conference, it is unlikely such an agreement can be forced on these nations again. President Morales, along with an international delegation representing civil society, formally delivered the People’s Agreement on May 7 to U.N. General Secretary Ban Ki Moon — the first step toward influencing talks during the next U.N. Framework Convention on Climate Change, this December in Cancun, Mexico.

You can read the People’s Agreement, and conclusion statements from each working group, on the homepage for the World People’s Conference on Climate Change and the Rights of Mother Earth: pwccc.wordpress.com.

“I think food one of the ways that people in the ‘Global North,’ in particular people from the United States, can relate to climate change,” said Nancy Romer, founder of the Brooklyn Food Coalition and a participant in the conference’s Food Sovereignty working group. “Climate change is both scary and very abstract. People don’t know what they can do about it. Food is a way for people to come together.”

“In the United States, it’s as if climate change is something in the future. But being in Cochabamba, whether it’s the loss of a glacier or the fact that almost all the riverbeds I walked past are dry, it’s not the future, it’s now,” said Nurah Amat’ullah, executive director of the Bronxbased Muslim Women’s Institute for Research and Development. “I think a global climate justice movement can be built just by people-topeople engagement and sharing. If among the 5,000-plus people we serve at our food pantry each month, I can communicate the urgency of now, in regard to the current climate crisis, I think I will make some small contribution to the movement and bring us closer to critical mass; the one grain of sand that begins the avalanche.”