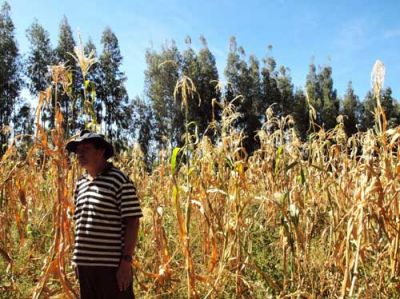 TOTORCAHUA, Bolivia—Ten minutes down a dusty dirt road from the World Peoples’ Conference on Climate Change, Don Cristobal points to a plot of wilted corn on the same land his grandparents tended.

“Here in Totorcahua, climate change is the principal problem causing our crops to fail,” Cristobal says of the once fertile area that now suffers from rising temperatures and less rainfall. “The most important thing is for the government to support agriculture.”

Cristobal has lost money on his crops and is just barely eking out a living selling the milk from his dairy cows. But he is in a position to demand more support from Bolivia’s governing Movement Towards Socialism party (MAS). He is finishing his second term as leader of Totorcahua’s Organización Territorial del Base, a small governing body that represents the community and receives funds from the government for local projects.

Farmers here are known as regantes or “irrigators” because of their affiliation with the Irrigators Federation of Cochabamba, one of the rural social movements that provide a base of support for MAS. These movements played a decisive role in rebellions beginning in 2000 that forced two presidents to resign and ended with the election of Evo Morales as president in 2005.

Last December, Morales won his reelection bid with strong support from rural voters who make up roughly two-fifths of Bolivia’s population. The process “will not be easy, it could take decades, even centuries,” Morales said. “But it is clear that the social movements cannot achieve true power without implanting a socialist and communitarian horizon.”

The presidency of Morales, an indigenous farmer who earned his reputation in social struggle, is in stark contrast to previous governments dominated by white or mestizo urban elites. Although MAS struggles at times with allegations of patronage, corruption and intense factional struggles between different sectors, Morales’ popularity remains high. “After holding many workshops and meetings on the subject, we are satisfied with the job of the president,” Cristobal says. “Before, the indigenous small farmers were forgotten, hated and subject to discrimination.”

The Morales administration has tried to address bread-and-butter issues neglected by previous governments, particularly in rural areas: literacy, investment in roads and electrification and infrastructure projects to support farmers. For example, Totorcahua received a new well that serves the area’s 45 family farms. A recently approved project will improve local roads.

Cristobal says the government has opened a national seed bank and the state agricultural bank is making available to farmers loans at 0 percent interest until harvest time. But he notes there are still serious unmet needs, particularly to continue to improve access to water in an area that was once lush with vegetation.

“The government needs to improve our irrigation. First, the channels need to be fixed up,” Cristobal says. Communal channels carrying spring water from nearby mountains have been the main source of irrigation for the regantes. Cristobal says he has called for additional wells to be opened.

He remains undecided about the government’s communitarian socialist direction. “We’re still in the middle of the process of changing our country,” Cristobal says. “If we see that it’s a good route for the change and to improve the conditions of our lives, then it’s something we will support.”