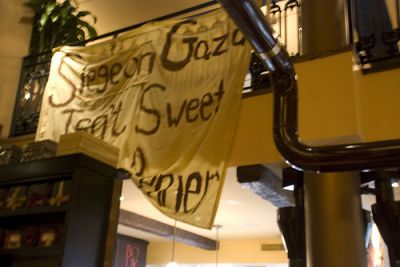 As the “Freedom Flotilla” steams toward Gaza City in an attempt to break Israel’s crippling blockade of the Gaza Strip, activists in New York City continue to stage protests calling attention to the fleet of ships and the situation in Gaza.

Israel has refused to allow chocolate and sweets, among many other commonplace items, into Gaza, claiming that they present a security threat. Max Brenner is a wholly-owned subsidiary of the Strauss Group, Israel’s second-largest food conglomerate, and boasts on its web page of its support and “adoption” of the Golani and Givaati Brigades of the Israeli army. Both the Golani and the Givaati Brigades have historically been associated with numerous violations of human rights.”We know the chocolate ban is not the most egregious human rights violation,” said banner-dropper Niomke Friedman. “But it illustrates the absurdity of Israel’s claim that the brutal siege on Gaza serves a legitimate security claim.”

The action was part of a wave of solidarity actions taking place around the US and throughout the world as the Free Gaza Coalition’s flotilla of eight boats bearing thousands of tons of eight and over 800 civilian sails toward Gaza. Israel’s defense minister Ehud Barak has stated that the Israeli navy will block entry, reinforcing Israel’s illegal blockade on Gaza’s waters.

As part of Israel’s brutal three-year long siege on Gaza, many basic items have been denied to Palestinians including canned fruit, jam, and chocolate.

During Israel’s recent massacre in Gaza, a Ha’aretz article reported that the Golani platoon operated “in the sector in which the [Israel Defence Force] has seen the toughest battles with Hamas, the eastern part of Gaza City”. They have also been implicated in massacres in the Jenin and Tul Karm refugee camps and the siege on Yasser Arafat’s Muqata compound in Ramallah.

The Israeli daily Haaretz has a report on the Max Brenner action.  You can also view a video of the action here.

The banner drop follows a May 27 action in New York that saw over 100 people take to the streets to demand that the flotilla have safe passage to Gaza to deliver 10,000 tons of humanitarian aid and to call on Israel to lift the siege of Gaza.

Palestine solidarity activists in New York have planned a march for Tuesday, June 1 “in the event of an Israeli effort to hijack the flotilla,” according to an email message from Gaza Freedom March organizer Felice Gelman.

Gelman’s message said that the march will demand that the U.S. government “act to protect its own peaceful citizens and the citizens of the world from acts of piracy and kidnapping committed with US military aid and the immediate release of the flotilla and its passengers.”