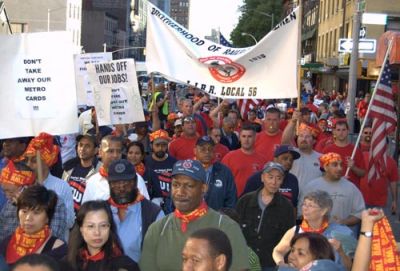 Thousands of union workers and supporters attended a rally at Penn Station in Manhattan on May 4 to speak out against public transportation cuts.

The rally was organized by Keep America Moving, a nationwide coalition of labor, environmental and community groups advocating affordable and green mass transit. Member organizations include the Rainbow PUSH Coalition, the Working Families Party and the American Federation of State, County and Municipal Employees.

“This campaign is a child of the financial crisis,” said J.P. Patafio, the national coordinator of Keep America Moving. “Transit workers around the country are facing serious cutbacks in service and in rates. If we want to invest in the future, and the future is a green economy, then we need to invest in mass transit.”

Demonstrators marched from Penn Station to the headquarters of the Metropolitan Transportation Authority on 44th Street and Madison Avenue to deliver a symbolic pink slip to Jay Walder, the chairman and CEO of the MTA.

“Our interests in this are mutual,” said NYC Student Union’s Director of Political Action Lucas Johnson, who spoke at the rally. “Workers, students, environmentalists and the rest of the community — we can all agree that we need more funding for public transportation.”

This kind of coalition effort, Patafio says, is especially important in the wake of service and workforce cuts by the MTA, which currently faces a budget shortfall of nearly $800 million.

While the MTA has received $1 billion in federal stimulus funding, 10 percent of which can be used for operational costs, the city has not used any of these funds to prevent the layoffs.

Recently proposed cutbacks include firing almost 500 station agents and eliminating the W and V trains, as well as 33 local and express bus lines.

On May 6, a Manhattan Supreme Court justice issued a temporary restraining order to stop the MTA from laying off 475 station agents, pending a hearing to ensure that the MTA had followed “proper procedure” in conducting the layoffs. However, as The Indypendent went to press, the MTA had already laid off 250 station agents who patrol platforms and do not work in station booths.

On the same day that the layoffs were postponed, the MTA also announced plans to fire another 1,000 transit workers, including cleaning crew and subway announcers.

John Samuelsen, president of TWU Local 100, says that a key aim of the coalition is to build union participation at a local, state and national level, which will then increase pressure on lawmakers to put transportation and labor issues at the top of their agenda.

Other initiatives for Keep America Moving include a series of town hall meetings throughout the country in early June, as well as pushing for emergency funding and working on legislation that would provide more federal support for public transportation.

Still, for station agents faced with the prospect of losing their jobs, emergency funding will come too late.

“What am I going to do? Start my life over at 35?” said Peggy Viaud, a station agent who has belonged to TWU Local 100 for the last four years.

Once she is laid off, Viaud, who attended the rally, plans to apply for food stamps and unemployment benefits for the first time.

“I had it all planned. I figured I’d pay off my car and buy a house in two years — live the American Dream,” said Viaud, who lives in Crown Heights, Brooklyn, “Now the new American Dream is to have a job.”