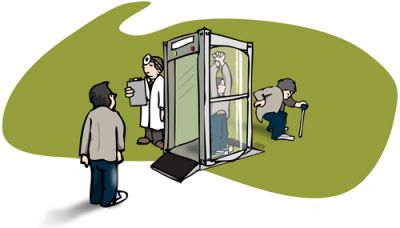 Preventive medicine is widely considered a panacea for all that ails both the body and the healthcare system. But sometimes an ounce of alleged prevention can lead to a pound of real harm. Extensive testing for diseases like breast and prostate cancers leads to overdiagnosis and overtreatment, meaning unnecessary surgeries, illness and death. It is worth examining how some vested interests promote specific preventive medical procedures in the United States.

Money is a significant factor in the prevention industry. Revenue for equipment, facilities and personnel for mammography screening runs into the billions of dollars annually. Societies of medical specialists endorse practices that maximize their members’ earnings and enlarge their role in providing medical care. An increase in screenings inevitably results in more interventions. Perhaps 30 percent of all surgeries and procedures in the United States are unnecessary. Some of the strongest evidence comes from studies demonstrating enormous geographic variation. Those areas with more interventions do not have different needs or better outcomes. Unusually high rates of various procedures, it turns out, are driven by local patterns of specialist availability and referral rather than health needs. At the same time it is estimated that unnecessary surgeries cause 12,000 deaths annually. Many experts claim that excess interventions and the harm they cause are an important factor in explaining why the United States is behind other industrialized nations when it comes to infant mortality, life expectancy and mortality at all ages. The Congressional Budget Office estimates that unnecessary “care” costs $700 billion a year.

In a recent op-ed in The New York Times, the researcher who developed the PSA screening test for prostate cancer called its overuse a “profit-driven public health disaster.” Men over 50 have undergone widespread screening for prostate cancer since the test was introduced in 1970. While long-term studies have failed to produce the expected decline in prostate cancer deaths, there has been a massive increase in its early diagnosis and treatment. Treatment can involve radiation and surgery. Many prostate cancers are very slow growing and never cause problems. A small number are aggressive and will prove lethal. With no way to distinguish them, widespread early intervention almost certainly causes incontinence and impotence among many men who would never have otherwise been affected by their prostate cancer.

The United States Preventive Services Task Force (USPSTF) is an independent panel of doctors and nurses that provides rigorous scientific and evidence-based assessments of preventive interventions. Panel members are strictly prohibited from conflicts of interest, and recommendations are not based on cost. Many medical societies consider their recommendations to be the “gold standard.”

The task force came to public attention after it recommended reducing mammograms because of the risk from overdiagnosis, overtreatment and radiation from Xrays used in the screening. The guidelines, released in November 2009, suggest that only women at high risk of breast cancer undergo mammography before they are 50. For most women, mammograms every two years from age 50 to 75 were advised.

The concern is that testing may cause more illness and death among younger women than it prevents. Pre-menopausal women have a relatively low risk of breast cancer and a high risk of both complications from radiation exposure and misdiagnosis of cancer. This is because younger women have denser breasts. By some estimates, mammograms themselves may be causing more breast cancer than they are detecting for younger women, despite low dosages per individual scan.

The flap that ensued over the USPSTF recommendations revealed how vested interests push prevention. After the task force issued its findings, the airwaves and press were dominated by individuals who had significant conflicts of interest, such as ties to groups representing radiologists and equipment manufacturers. Their message was that “countless women would die” and USPSTF’s recommendations were driven by cost considerations.

Several medical societies with skin in the game suggest many more screenings than the USPSTF. The American College of Radiology and the American Society of Breast Surgeons recommend annual mammography for all women over 40, so that a woman living to age 80 would undergo a minimum of 40 mammograms. Following USPSTF guidelines, most women would instead have a total of 13 mammograms.

Needless to say, this has caused a lot of confusion and anguish, especially for those diagnosed with breast cancer. Joan, a writer who lives in Vermont, was treated for breast cancer after her first- ever mammogram at age 42. Five years later these is no sign of cancer recurrence. “I just don’t know what to think,” she says, recounting her reaction to the USPSTF recommendations. “Maybe my life was saved, maybe not. Once something’s called a cancer, though, there’s no going back.”

Joan’s case raises the issue of over-diagnosis and treatment. When a needle biopsy detected ductal carcinoma in situ — the lowest-grade tissue change considered malignant — she underwent surgery and a course of radiation. Malignancy is not a black-and-white diagnosis, it exists across a spectrum of tissue changes and experts sometimes disagree on where to draw the line. In one study pathologists disagreed on the diagnosis of needle biopsies 10 percent of the time.

In fact, as best as contemporary science can determine, many women diagnosed with “carcinoma in situ” detected on a mammogram will never develop breast cancer. Their lesions will not evolve or will disappear. No one knows the numbers for sure but the USPSTF’s best estimate is that as many as10 percent of cancers are overdiagnosed. Other estimates run as high as 70 percent.

In a similar fashion, the professional society of surgeons who operate on neck arteries to prevent stroke endorses ultrasound screening for anyone over 55 with any vascular risk factor for carotid artery disease, including high blood pressure and diabetes. The USPSTF says testing people who have no sign of stroke is likely to cause more harm than good because it can lead to unnecessary surgeries. Clinical trials show that at least three percent of even the best surgeons’ patients can be expected to have a stroke or die because of the surgery. No other medical society recommends aggressive screening in line with that recommended by the vascular surgeons.

The American Urological Association, representing surgeons who perform biopsies and prostate surgery, recommends screening all men over 40 unless they don’t want to be tested or have a life expectancy of less than 10 years.

Just as many men have undergone unnecessary and harmful interventions set in motion by PSA testing, many women with ductal carcinoma in situ have likely been treated unnecessarily. Some women who get surgery, chemotherapy and radiation will die from the treatments. Radiation therapy for breast cancer is standard for even the lowest-grade cancer. This treatment alone can be expected to cause a second cancer in one to two of each 100 women treated. That’s a risk worth taking only if you have to.

A sobering reality reflecting our limited understanding of cancer biology is that even aggressive surgical measures to prevent cancers sometimes fail: total surgical removal of the prostate, breasts, or ovaries is sometimes followed by the mysterious appearance of tumors with origin from these tissues. It may be that micro-metastases lurk in the bodies of some individuals even before a primary cancer is detected or that some tissue has remained despite apparent removal. It’s just not known.

BEWARE OF THE CUTTING EDGE

Dr. Claudia Henschke at Weill Cornell Medical Center advocated routine chest CT scans, a type of X-ray, for anyone who had ever smoked, purporting that most lung cancers could be prevented this way. Her research supporting this conclusion was published in top medical journals without initial disclosure that it was funded heavily by tobacco manufacturers and that she stood to gain from patents on related technology. Weill Cornell may have facilitated the operations of a foundation set up to obscure the funding sources and also had a financial stake in research-related patents. The story of tobacco industry backing and conflicts of interest was featured in The New York Times in 2008.

Emily had undergone about half a dozen annual chest CTs before the 2008 Times report. At her next visit to her pulmonologist she asked about the report. “Oh yes,” he said, “we won’t be doing any more of those as your condition hasn’t changed.” She saw him one more time and then the semi-annual follow-up reminders she’d received for years just stopped.

One prominent specialist has taken the idea of prevention even further. “Preventive intervention for first-episode depression is an exciting, emerging field,” wrote Dr. Richard Robinson, chairman of Psychiatry at the University of Iowa Carver School of Medicine, in an April 2009 editorial in the British Journal of Psychiatry. Cautioning against “setting sights too low,” Robinson envisions treating all 20- to 30-year-olds regardless of mood symptoms with two to three months of antidepressants based on the idea that this might prevent later psychiatric or even medical problems. Dr. Robinson declared he had no conflicts of interest, despite having recently been the focus of a scandal for failing to disclose financial ties to the pharmaceutical industry.

The controversy related to a report by Robinson in the Journal of the American Medical Association (JAMA) showing that treatment with Lexapro prevented depression in patients who had just had a stroke. As it turned out, he failed to note that the study found psychotherapy to be equally effective, and he did not disclose his financial ties to Lexapro’s manufacturer. What brought attention to this was JAMA’s attack on Jonathan Leo, the whistleblower in the affair. “He’s a nobody and a nothing,” the editor of JAMA told the Wall Street Journal. Dr. Leo says JAMA editors threatened to damage his career if he didn’t retract his allegations, all of which were eventually acknowledged to be correct by Robinson and JAMA, which, like other medical journals, is dependent on income from pharmaceutical industry advertisements.

The market for any given treatment can be expanded by applying it to more people. The most focused efforts target only the sick. Earlier patient identification expands this pool and can be achieved by treating people with milder and milder symptoms. Screening a population considered “at risk” but not necessarily showing any symptoms may bring minor symptoms into the spotlight. The natural culmination of market expansion is the creation of illness. This practice, referred to as “disease-mongering” can be seen daily on your television. You may find yourself reflecting … perhaps your erections are not as hard as they should be … maybe you are clinically depressed … maybe things could be better.

Private insurance companies in competitive environments have found another way to use “wellness” as a way to increase profit margins. To attract subscribers to their plans, they promote various incentives, such as free or discounted gym memberships. It is likely, however, that gym plans are offered to entice healthy people who will cost the companies less money. On the other hand, many insurance plans provide no coverage for smoking cessation interventions, which have been well established as having a high net benefit. My last Aetna plan offered reduced charges at various gyms, but coverage of smoking cessation was excluded. Who wants to attract smokers to their plans?

True prevention is a wonderful thing, and defining what works and what doesn’t is an ongoing process. The great leaps forward in life expectancy in the modern age are attributable to prevention more than to treatment, starting with sanitation.

But a number of current interventions get a “Grade A” recommendation from USPSTF because solid evidence supports “high certainty that the net benefit is substantial.” These include cervical exams and PAP smears for sexually active women, smoking cessation interventions, blood pressure checks and colonoscopies for those over 50. All recommendations and guidelines are on the USPSTF website. But a wise patient should not leap at everything packaged as prevention.

Editor’s Note: names have been changed to protect patients’ privacy.

Laura S. Boylan, M.D., is a practicing neurologist, faculty member at the New York University School of Medicine and board member of Physicians for a National Health Program Metro NY.