Days before a probable showdown at sea between Palestine solidarity activists traveling with a nine-ship fleet and the Israeli Navy, demonstrations took place across the United States and the world today to demand that Israel allow the activists safe passage to Gaza to deliver 10,000 tons of humanitarian aid. 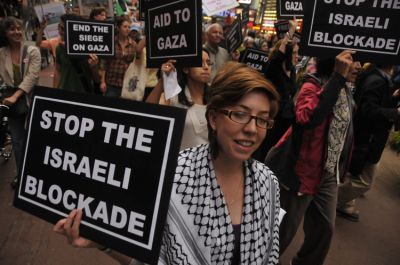 In New York, more than 100 people gathered outside the building of the New York Daily News to call attention to the lack of news coverage of the flotilla, walked past the Israeli Consulate and marched to Times Square chanting “Break the blockade, Gaza needs aid.”  They passed out hundreds of fliers to pedestrians explaining how the “Freedom Flotilla” was attempting to break the blockade of Gaza and what the potential Israeli response could be.  In Times Square, demonstrators gathered in the center and chanted “Free, free Palestine” while tourists looked on and snapped pictures.

The action was organized by a coalition of local groups, including Adalah-NY, Al-Awda NY, the Activist Response Team, Gaza Freedom March and Jews Say No.

The “Freedom Flotilla” is made up of nine ships that are currently in the Mediterranean Sea.  The ships are stocked with badly needed aid, like construction materials, medical equipment and school supplies, for Gazans; such aid has been blocked by a crippling Israeli naval, air and land blockade.  Palestine solidarity activists from more than two dozen countries, including the United States, are also part of the flotilla.

The Israeli Navy has vowed to stop the ships from reaching Gaza, and has set up a makeshift detention camp at the southern Ashdod port in Israel for processing, detaining and deporting the activists that are part of the mission.

“Through their system of apartheid and occupation, they’re denying the Palestinians the right to live,” said Randa Wahbe, a Palestinian-American active with Students for Justice in Palestine at Columbia University and Adalah-NY:  The New York Campaign for the Boycott of Israel.

Israel and Egypt’s blockade has badly damaged Gaza’s economy.  More than 80 percent of the population is dependent on humanitarian aid, 35 percent of Gazans are unemployed, and 90 percent of Gaza’s industry is closed or operating at less than 10 percent capacity.  Many homes and buildings damaged and destroyed as a result of the 2008-09 Israeli assault on Gaza remain that way because Israel has not allowed in enough construction materials. 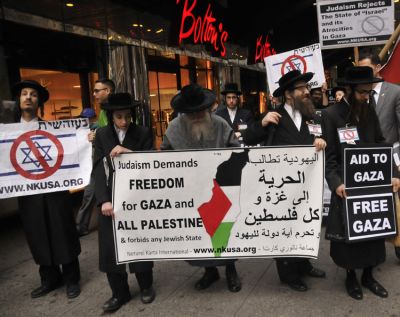 A Turkish humanitarian group and the Free Gaza Movement, which has put together eight other attempts to break the naval blockade of Gaza, organized the flotilla.  While some past attempts by the Free Gaza Movement to deliver aid were successful, recent missions have been met with Israeli violence, including the ramming of a Free Gaza boat and the detention and deportation of activists, including former U.S. Congresswoman Cynthia McKinney.

“We should be demanding that Obama stop his brutal silence and tell the Israelis to let the boats in.  Gaza is not part of Israel,” said Stanley Heller of the Connecticut-based Middle East Crisis Committee.  “What will happen?  I don’t know, but if there’s enough people who scream and yell, it will become an embarrassment” for Israel.

Any Israeli move to block the ships from entering Gaza could backfire:  Turkey’s Prime Minister has called on Israel to allow the boats through, and an Israeli Foreign Ministry spokesman told the Wall Street Journal that, “we can’t win on this one in terms of PR.”  Israeli relations with Turkey have deteriorated since the Israeli attack on Gaza.

In recent days, the Israeli government has embarked on a public relations campaign aimed at spinning what is likely to be negative coverage of the Israeli Navy forcibly stopping a humanitarian mission with lawmakers and activists on board. Israel claims that there is no humanitarian crisis in Gaza, that enough aid is allowed in and it must maintain control over the seas because the country is in a state of armed conflict with Hamas, the Islamist movement that governs Gaza and is holding an Israeli soldier captive.

International organizations and the United Nations give a bleak picture of life in Gaza, and human rights groups say that Israel is violating international law by collectively punishing civilians in Gaza.

“The people who are on the way to Gaza may well be stopped,” said Naomi Brussel, a Jewish-American woman who is a part of the Activist Response Team. “I’m very worried that the people on those boats may end up drowning or end up in a dangerous situation.”

More pictures from May 27 action.