A near-capacity crowd packed House of the Lord Church in Brooklyn June 17 to hear speakers from the MV Mavi Marmara, the Turkish ship carrying humanitarian aid to Gaza that was boarded by Israeli commandos May 31. Nine passengers were killed and dozens wounded in the raid. 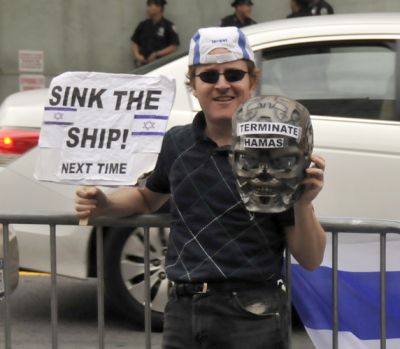 Only a half-dozen or so people attended a counterdemonstration called by the Jewish Community Relations Council of New York (JCRC), an umbrella group for many Jewish organizations in the city. The counterprotest was kept across the street and down the block, thus avoiding the hostile confrontations that sometimes arise at actions in support of the Palestinian people.

One of the scheduled speakers was not allowed into the country. Former Turkish Member of Parliament Ahmet Faruk Unsal, an activist with the Foundation for Human Rights and Freedoms and Humanitarian Relief, a Turkish group that was one of the main forces behind the Gaza Freedom Flotilla, was not allowed to board the plane from Turkey. Several New York politicians had called on the State Department to investigate the visa applications of the scheduled speakers (see “New York Politicians Peddle Israeli Propaganda About Gaza Flotilla”). 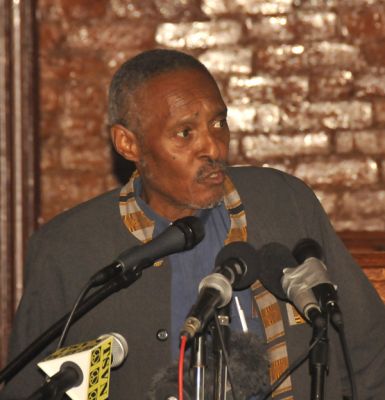 City Councilman Charles Barron, who took part in an overland aid delegation to Gaza last year, addressed the crowd as well. Saying he has been getting “a lot of heat” lately over his stance in support of the Palestinian people, he recounted how he received a call from a rabbi who said he was “outraged.” Barron asked him whether he just wanted to “cuss me out and hang up” or whether he wanted to engage in an “intellectual discussion.” Barron proceeded to enumerate some of the points such a discussion would entail. “Who are the terrorists? What is terrorism? How do you define terrorism? How do you define acts of piracy? Is it just for Somalians who are trying to protect their coastline and their fishing industry and stopping boats from coming into Somalia and dumping toxic waste? Are those  pirates? Or are there pirates who take boats in international waters and murder people with no justification?” 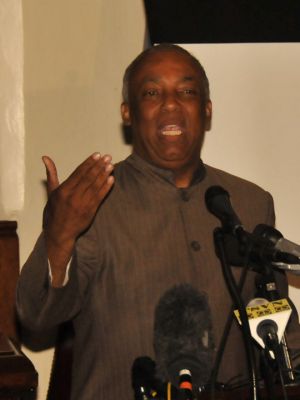 “Any experience that deliberately sets up a people to die because they can’t get water, can’t get medicine, is a death camp,” Barron went on, “and if you don’t like me using those words, too bad. That’s what it is. You can’t purposely set up people to die, inflict genocide on other people and think that you’re the only one that has a monopoly on suffering.  You have no monopoly on suffering. Every people has a holocaust. There’s been an African holocaust.” Millions of black people died under the apartheid regime in South Africa, with its partner Israel, Barron pointed out, “so don’t talk to me about your outrage.”

“You only go around once in life so you might as well live it with some spine,” he concluded.

Kevin Ovenden, national coordinator of Viva Palestina and a passenger on the Mavi Marmara, spoke of his experiences aboard the boat when it was attacked by commandos from the Israeli Defense Forces. Viva Palestina has organized several successful missions to deliver humanitarian aid to Gaza. 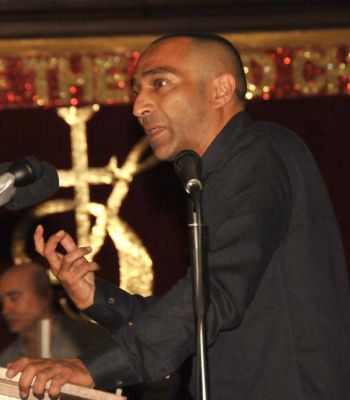 Ovenden described being held in an Israeli prison in the Negev desert, remembering “the brother who was shot through the leg, just one meter in front of me; the one shot through the abdomen 50 centimeters  to the right of me. Where we were, there were no Israeli commandos within the immediate proximity. It is simply unfeasible for anyone to maintain that the people who fired those shots from above, not within our line of sight, in any sense could feel threatened by the two men who were shot either side of me. Simply unfeasible. A complete and utter  lie. It’s also a lie in the shooting dead of Cevdet Kiliçlar, a young man who left a wife and two children, a photographer,  he was holding a stills camera, again, not one Israeli commando within the immediate vicinity, but he was shot through the forehead, the high-velocity bullet blowing away the back third of his skull, cradled by a friend of mine, as the last two seconds of his life passed away.”

“Their blood is now lapping on the shores of Gaza,” said Ovenden, “but their blood was not shed in vain because the tide has turned and we must seize this tide to make a lasting change for the people of Palestine, the Middle East, and around the world.”

Backed by the United States and Britain, Israel has refused to allow an international investigation of the attack on the flotilla, instead appointing an Israeli body to look into the incident. “This is a whitewash inquiry. The thing about whitewashes, which any painter or decorator will tell you, is that if you slap whitewash on too thick and too quick, it begins to peel as soon as you put it on. The British establishment has just found this out. Thirty-eight years ago they commissioned a shotgun inquiry into the Bloody Sunday massacre that killed 14 people, the Widgery whitewash, and it’s just been overturned by the Saville inquiry and the truth is out and the apologies are coming. Thirty-eight years too late, but justice will not be denied forever, and justice in this case will not be denied.” 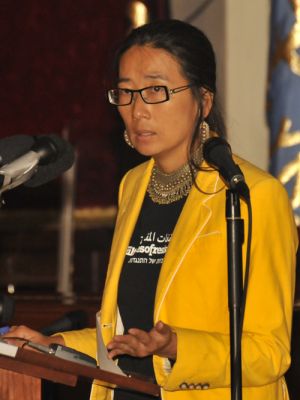 Filmmaker and activist Iara Lee was also a passenger on the Mavi Marmara. She had visited Gaza in December with the Gaza Freedom March and “was appalled to see the destruction of infrastructure and the effects of the use of white phosphorus, how fishermen could not even fish off their waters. And I thought it was our moral obligation to continue this fight, so we supported the Gaza Freedom Flotilla. I went as a filmmaker, as an activist, as a humanitarian aid worker.

“We had over 600 passengers on our boat, representative of over 40 countries. During the journey I got to see that they were coming from all walks of life and our common goal was to break this illegal siege, bring our token, even if it was 10,000 tons, it was still token [compared to] the humanitarian aid they needed, because at the end of the day, they want to have trade, they want to live like normal people.”

She showed footage that she and her crew had smuggled off the Mavi Marmara; the footage is unusual, because most of the video that has been released has come from the Israeli Foreign Ministry and has been severely edited. “The first thing they [the commandos] did is to confiscate all our footage,” explained Lee, “because they didn’t want the world to know. And despite the danger, my crew and I decided that we were going to film and try to get this footage out. … We are still trying to restore some of the corrupt data, and we will be able to have a little bit more, to show before the raid how people were a peace boat, not a hate boat, and that we were not there to lynch Israeli soldiers. We didn’t even know they were going to come and start killing us.”

Many believe that, like Operation Cast Lead, the three-week attack Israel mounted on Gaza in 2008-09 that resulted in more than 1,400 dead and thousands wounded, the assault on the Gaza Freedom Flotilla will serve to shift world opinion against the Israeli siege of the territory.  Egypt has already eased its role in the blockade, saying it will now open the Rafah crossing into Gaza, which had previously been tightly controlled and only accessible for a couple of days a month.

Said Ovenden: “Because the tide has turned, this is the meaning of the massacre of the Mavi Marmara. It is that the miasma of defeat that had settled, sedimented, for so long in the minds of people throughout the Middle East and even upon many of our own minds in this room tonight is finally lifted and we can see through the disappearing fog the way forward and how we can start to take some steps forward to victory. The question is not will this siege be lifted. The question is how rapidly it will be lifted and how this siege will be ended… Across the world, now, all those who’ve been moved by this issue need to step into the front rank of the movement alongside those in Turkey who’ve lost their loved ones. From Vancouver to Lake Van, from Casablanca to Kuwait, from all four points of the compass, we must mobilize now, to head back to Gaza and through Gaza towards the liberation of Palestine.”