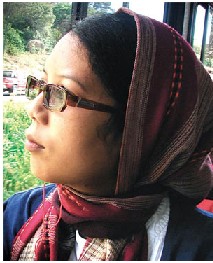 Jun 1 (GIN) – A South African journalist who joined the flotilla bringing material aid to war-torn Gaza has been found.

Magboeba Davids said she lost track of her daughter, Gadijah, age 25, after the flotilla of 6 boats came under attack by Israeli defense forces and nearly all of the 700 international activists aboard the ships were placed under arrest. The Israeli government has refused to identify those killed in the attack, but it is believed that between 10 and 17 civilians died from Israeli gunfire.

Gadijah, a reporter with Radio 786, had been covering Palestinian issues for some time and had wanted to be part of a team delivering medical supplies, and was not interested in anything military, the mother said.

Davids was on board the Mavi Marmara when the flotilla embarked on Thursday night.

“She said they had been warned to prepare for the worst. She said: ‘Mommy, we’ve gone through all our drills and have been told to sleep in our clothes, but we’re prepared for the worst and I’m very calm’.”

“She will come back a stronger person. It was a maiden experience for her on so many levels – it was the first time she left home, first big story, and now she has an international scoop – we are very proud of her.” w/pix of G. Davids

Jun 1 (GIN) – US lawyer Peter Erlinder is behind bars in Rwanda, days after his arrival in the Central African country. He had come to defend Victoire Ingabire Umuhoza, an alleged genocide denier, and political opponent of the current president, Paul Kagame.

Dozens of lawyers and their organizations have appealed for Erlinder’s release. “There can be no justice for anyone if the state can silence lawyers for defendants whom it dislikes…,” said David Gespass, president of the National Lawyers Guild.

In a visit to a memorial to Tutsis killed in the 1994 genocide, she asked why Hutus who also died weren’t remembered. She was arrested as a “genocide denier” and is free on bail. Her case drew the attention of Erlinder, a law professor at William Mitchell College of Law in St. Paul, Minnesota. If convicted, Ingabire, 41, could be sentenced to more than two decades in prison.

US Ass’t Sec’y of State for African Affairs Johnnie Carson accused the Kigali government of restricting freedom prior to presidential polls in August, in which Ms Ingabire is a challenger.

President Paul Kagame is a Tutsi former rebel leader who came to power to end the killings. His forces have been accused of massacring Hutus after the genocide ended. w/pix of P.Erlinder 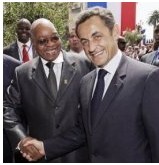 Jun. 1 (GIN) – After years of troubled relations with its former colonies, French President Nicolas Sarkozy announced a new beginning with the now-independent African nations. Speaking this week at the 25th Africa-France Summit, he promised generous aid packages, trade deals and political support for an Africa seat on the U.N. Security Council.

Some 250 business executives and rights and civil society group leaders from around Africa and France have already checked in to attend workshops on the sidelines of the summit.

Over the past three years, Sarkozy has cut French military bases in Africa from five to three and reviewed the defense pacts that kept several African dictators in power.

But he has to repair misunderstandings arising from a speech in Dakar, Senegal, shortly after taking office in 2007. There he managed to offend African leaders and intellectuals with a speech seen as riddled with stereotypes and prejudices.

“The tragedy of Africa is that the African has not fully entered into history,” Sarkozy said naively at that time, adding that Africans had missed out on “progress”.

On the economic front, Sarkozy is pledging “win-win” partnerships with Africa. But his offer failed to convince French rights group Survie International, which noted that Paris still defends its interests in places like Niger, a prime source of uranium for French nuclear giant Areva.

The Nice summit coincides with the 50th anniversary of the independence of 14 former colonies who have also been invited to Paris for National Day celebrations on July 15 with their national armies taking part in the traditional Bastille Day parade.

“Africa is our future,” said French President Sarkozy, “and will be a principle reservoir for world growth in the decades to come.” w/pix of N.Sarkozy and J.Zuma 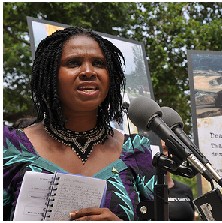 Jun 1 (GIN) – Activist Emem Okon of the Niger Delta was among 17 people representing oil-producting communities in Angola, Ecuador, Burma, the Philippines and around the world to be locked out of a shareholders meeting on May 30 by the oil giant Chevron.

Ms. Okon, who traveled to Houston, Texas, from Nigeria’s oil-rich Delta region, said she came to urge the company “to clean up the environment, end gas flaring, and to respect their human rights policies, which call for two-way communication between Chevron and the community people,” she said.

Police arrested five protestors with The True Cost of Chevron Network who had rallied to call attention to Chevron’s human rights and environmental record.

In a radio interview, Ms. Okon said: “I came to tell Chevron that they have oppressed in the Niger Delta region with impunity for the past fifty years, poisoning our waters, devastating our environment, killing the fish we eat, burning poison gas through gas flares that has caused cancer, asthma, corroding our roofs. And they have not done anything to alleviate the sufferings of the people as the result of their activities.”

“I am surprised at the attention that the BP oil spill has attracted in the United States,” she continued, “and I expect that the condition in the Niger Delta should attract the same coverage…  Chevron (should) stop their inhuman activity and abuse of human rights in the Niger Delta region. w/pix of E. Okon

More information can be found at www.justiceinnigerianow.org