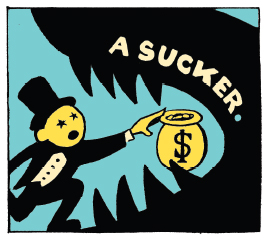 When the end of the housing bubble sent Wall Street into a nosedive, it created a disastrous economic downturn that the rest of us are still struggling to survive. Two years later, Congress is trying — and failing — to pass a financial reform to stop the lending practices that led to the bubble and put the banking behemoths that speculated on it on a tight leash.

A new book, Understanding the Crash (Soft Skull Press, June 2010), uses a graphic nonfiction format to cut through the confusion and explain how mortgage lenders and investment banks managed to crash the economy. Authors Seth Tobocman, Eric Laursen and Jessica Wehrle show how low-and middle-income homeowners became a gold mine for lenders and speculators — until it all came crashing down — and what is needed to build a financial system that instead rewards community and sustainability. Here’s some of what they found.