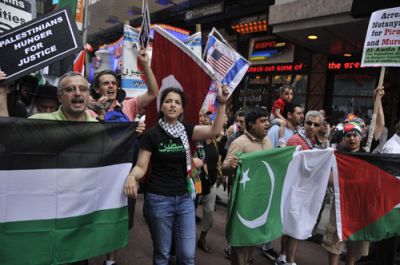 As Israel continues to deal with the international condemnation of its May 31 raid on an aid flotilla trying to break the Gaza blockade, Palestine solidarity groups in New York City have mobilized thousands of people to participate in protests, attend talks and learn more about the realities of life on the ground in Palestine.

Organizers with Adalah-NY, as well as Al-Awda New York and Jews Say No!, are looking to the boycott, divestment and sanctions (BDS) movement targeting Israel as the next step for keeping people involved.

First initiated in 2005 by a large coalition of Palestinian grassroots organizations, the BDS movement has spread around the world as a method to pressure Israel to obey international law — a goal that is likely to have a special resonance after the Israeli navy stopped the flotilla from reaching Gaza by attacking and commandeering the ships in international waters.

“After every crisis, there is always a surge in interest in Palestine solidarity work,” said Ethan Heitner, an activist with Adalah-NY. The BDS movement “is a way to do the work year-round and continue to put pressure proactively on Israel beyond responding to the immediate headlines.”

Adalah-NY is currently calling for the boycott of three different stores in Manhattan: Max Brenner, an Israeli chocolate shop that has ties to the Israeli military; Aroma Espresso, an Israeli-owned coffee shop; and Ricky’s NYC, a beauty supply store that carries AHAVA products, whose main factory is located in an illegal settlement in the West Bank.

The BDS movement demands that Israel withdraw from the occupied Palestinian territories, implement equal rights for Palestinian citizens of Israel and recognize the “right of return” for Palestinian refugees and their descendants who fled or were expelled from Palestine during the 1947-49 Israeli-Arab War.

The attack on the flotilla “really brought home that Gaza is occupied and under siege,” said Jane Hirschmann, a founding member of Jews Say No!. “Suddenly, people were saying, ‘Wait, what’s wrong with this picture? Why can’t these materials be brought into Gaza?’ It brought home concretely to people the problem and the issue in a way that it had never done before.”

Gaza has been under a severe blockade since June 2007, when the Islamist movement Hamas took control of the coastal strip. Banned items included chocolate, toys and musical instruments, according to the Israeli human rights organization Gisha. The embargo has crippled the economy, and in the aftermath of the devastating 2008-09 Israeli assault, the infrastructure of Gaza remains severely damaged due to Israel largely blocking construction materials from entering.

In response to mounting international pressure, Israel agreed June 20 to “ease” the blockade of Gaza. But human rights groups such as Human Rights Watch and B’Tselem have viewed the announcement only as a tiny step in the right direction — the naval blockade will remain, and the movement of people and exports across the border will still be restricted.

“The Israeli strategy is to make the international community talk about a bag of cement here, a project there. We need full unfettered access through all the crossings,” Christopher Gunness, a spokesman for the U.N. Relief and Works Agency, recently told Reuters.

But while the world’s eyes remain on the blockade of Gaza, many activists emphasize that ending the siege is only the first step in a long struggle.