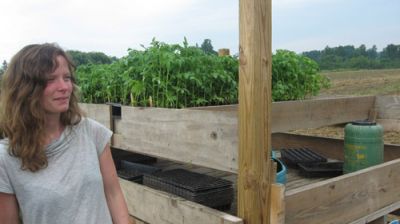 As local greenmarkets are bursting with fresh food from farms in the tri-state area, The Indypendent’s Elizabeth Gyori caught up with Jen Griffith, the farm network coordinator for Just Food, an organization that helps connect New York City residents to our local farmers.

Elizabeth Gyori: What is the definition of “just food”?

Jen Griffith: It’s creating a sustainable food system where people have the ability to know how their food is grown, to put a face on their food and be able to make educated decisions about their food.

EG: What is considered “local” produce?

JG: We consider local to be within 250 miles. A lot of people say 100 miles, but New York City is a really big city so we go a little bit further. But, the majority of our farmers are actually within 100 miles of the city. It’s a one-day drive for the farmer to come in from that distance and go back. So we figure it’s economically viable for a farmer to do that.

EG: What kinds of produce are in season right now?

JG: It’s so many greens like salad greens, spinach, escarole, spring onions, radishes and turnips. If you’re lucky, asparagus and strawberries. But, I think that ramps are over right now.

EG: How do you help connect New Yorkers to local farmers?

JG: We have three programs that farmers can actually sell food through. Our biggest is Community Supported Agriculture [CSA] New York City where you invest in the farm at the beginning of the season and then you get a weekly delivery of a share of the farm’s produce. Normally, people go to the farm and pick up their produce but it doesn’t really work in New York City, so we work with farmers so that they can come down into the city and drop off to community groups here. We have about 30 farmers selling to about 100 different CSA groups throughout the city. We also have a farm-to-food pantry program called Food for All that’s funded through the [New York] State Department of Health. The third one is City Farms Market, which includes really awesome community- run farmers markets where we help by matching farmers with them.

JG: I think it’s amazing that they even made a plan to look at food. It was kind of ignored in some previous city planning. But what I really like about FoodNY C is the process of how people made it. It came out of the Food Justice Summit that was a free event open to the public — over 1,000 people showed up. And everybody worked on these issues together so it was just a really democratic way of deciding what we were going to include.

EG: So what’s the next step?

JG: We just need to keep doing what we’re doing already because I feel like a lot of people are getting excited. I think more New Yorkers could cook at home. I think that would be a really great way for people to continue getting involved in their food system. We’re really good at buying fresh fruit and vegetables, but maybe we could think about all of the different products we eat and see that everything on your plate could be grown in New York City. We encourage people to think about our meat sources and see how sustainable they are. And look at our milk sources and ask how can New York consumers support the [local] dairy industry. Ask how can we get more wheat grown in New York City so that we can eat local bread. I think that’s a step forward. For example, Just Food had a really big campaign to legalize beekeeping. And in March, the Department of Health overturned the code so that now you can keep bees in the city. And so there’s just been this explosion of beekeepers around the city. I think it’s just a really fun way to get involved in your food system.

To learn how to connect to fresh produce and other tips about how to eat sustainably, visit justfood.org.