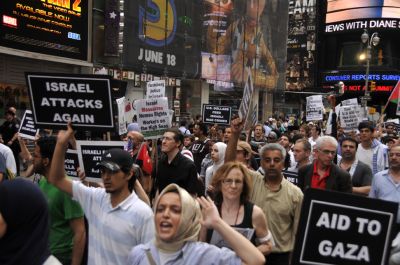 For the second straight day, hundreds of New Yorkers filled the streets of Midtown Manhattan June 1, denouncing the Israeli naval attack on a ship carrying civilians and humanitarian aid that was trying to break the siege of the Gaza Strip.  The Israeli raid on the “Freedom Flotilla” killed at least 9 people and injured dozens more. 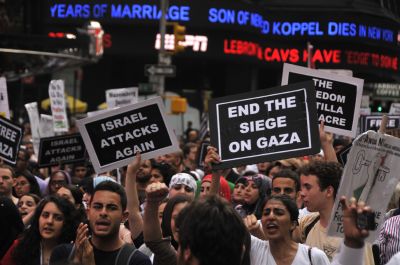 The June 1 action followed a May 31 emergency response demonstration that saw at least 1,000 people come out.

Demonstrators rallied across the street from the Israeli Consulate and then marched to Times Square. 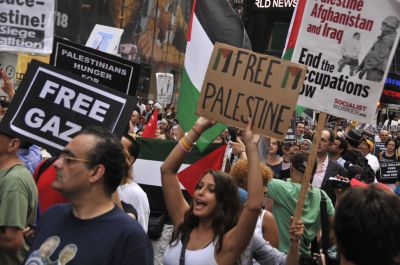 City Councilman Charles Barron, a former Black Panther who traveled to Gaza with a Viva Palestina convoy in July 2009, spoke at the rally.

“We don’t want our tax money being used that way anymore,” he said, referring to the American aid given to Israel every year.

The attack continues to have consequences in various arenas around the world.

Here are some of the most relevant events taking place around the world in regards to the flotilla attack:

-The United Nations Human Rights Council passed a resolution today that paved the way for a Goldstone report-like independent committee to investigate the events that led to the deaths and injuries of those aboard the Turkish Mavi Marmara.  The United States voted against the resolution.

-Turkey, who has harshly condemned the Israeli killings of 9 activists, said the only way normal ties would be restored with Israel is if Israel lifts its siege of Gaza.

-British Prime Minister David Cameron has called on Israel to lift the blockade of Gaza.

-Egypt, which is an active partner in the Israeli blockade of Gaza, has temporarily opened up the Rafah border crossing to Palestinians.  However, Egypt, who receives the second most amount of money in U.S. aid (next to Israel), will likely not open the border permanently.

-A fracas broke out in the Israeli Knesset when Hanin Zoabi, a Palestinian citizen of Israel who is a Balad Party Knesset member and who was on the flotilla, attempted to speak about the raid in the Knesset.  Some Israeli Jewish members of the Knesset called her a traitor.

–Accounts from the activists who survived the attack and who were deported are beginning to surface, contradicting Israel’s insistence that the soldiers were forced to shoot them after being attacked by a “lynch mob.”  Under intense international pressure, Israel has agreed to deport all of the activists that had been detained after docking at the Ashdod port following the Israeli raid.