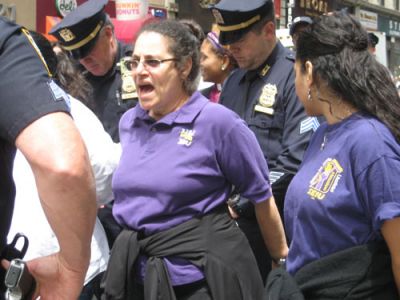 Wearing a clerical collar, a pressed black suit and plastic handcuffs, Bishop Orlando Findlayter climbed with purpose into the back of a New York Police Department truck and took a seat. He was among 37 people arrested May 24 for blocking the intersection in front of 26 Federal Plaza in downtown Manhattan, an act of civil disobedience the demonstrators hope will increase pressure on Congress and President Barack Obama to pass comprehensive immigration reform this year.

“We have written letters, we have marched, we have rallied and we have seen no real action. So it is our intention to step up,” Findlayter said before he stepped into the intersection. He represents 140 local Caribbean congregations with undocumented members. “This worked during the civil rights era, and we believe immigration is the civil rights issue of the 21st century.”

Next to Findlayter sat several purple shirted members of the Service Employees International Union Local 32BJ, including Secretary Treasurer Hector Figueroa. “My motivation is very simple,” said Figueroa before his arrest. “We have a broken and unjust immigration system that is allowing the exploitation of millions of workers.”

With more than 120,000 members nationwide — including 70,000 in New York — 32BJ is the largest property service workers union in the country. Figueroa described how 1,200 unionized janitors in Minneapolis lost their jobs last October because they lacked legal status. Another 475 janitors in San Francisco could be dismissed for similar reasons.

“They should have a mechanism to become legal residents,” Figueroa said.

The comprehensive immigration reform outline proposed by Sen. Chuck Schumer (D-N.Y.) includes a path to citizenship. But his proposal takes a “border-first” approach, putting applications for legal residency on hold for eight years until a visa backlog is cleared.

“Focusing on the border security is really denying the reality that there are millions of people here working,” said Lenore Freilander, 32BJ vice president.

City Council and state Assembly members were among those arrested in the New York City protests, part of a nationwide wave of civil disobedience that included actions in Los Angeles and Chicago. An estimated 35,000 people marched on May 29 under a broiling sun in Phoenix, Ariz., against a new state law that requires police to request proof of citizenship from suspected undocumented immigrants.

“Arizona shows that if we don’t change our immigration system, states are going to take the law into their own hands and come up with measures that will be contrary to our civil liberties,” said Figueroa, citing concerns that the new measure could result in widespread racial profiling.

Whether an omnibus reform bill can pass in an election year remains unclear, but advocates say they will continue to press for it. U.S. Rep. Yvette Clarke of Brooklyn told protesters on May 24, “We have a job to do and it transcends election cycles.”

The May 24 protest was the second of three New York City civil disobedience actions over the past three weeks in which a total of 109 were arrested. These actions were organized by a coalition of labor, immigrant and social justice organizations. More demonstrations and a 72-hour hunger strike are planned for later this month.