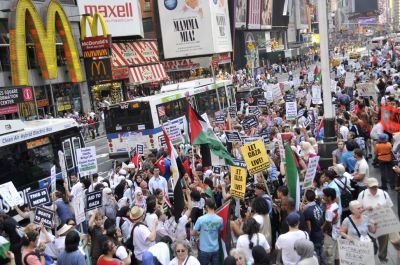 Shocked and furious New Yorkers took to the streets of Midtown Manhattan and joined thousands of other Palestinians and solidarity activists in unequivocally denouncing the Israeli naval attack on a ship carrying civilians and humanitarian aid that was trying to break the siege of the Gaza Strip.  The Israeli raid on the “Freedom Flotilla” killed at least 9 people and injured dozens more.

Chanting “Not another nickel, not another dime, no more money for Israel’s crimes,” while holding signs condemning what protesters called Israeli “piracy,” at least 1,000 people gathered in Times Square this afternoon and marched to the Israeli Consulate building.  The demonstrators demanded an end to U.S. aid to Israel—which amounts to about $3 billion a year—and accountability for Israeli violations of international law like the attack on the flotilla.

A diverse coalition of Arab, Muslim, Jewish and left-wing groups filled the streets of New York with Turkish and Palestinian flags.  The boat carrying 600 activists was headed by a Turkish aid organization, and the Turkish government unofficially backed the convoy. 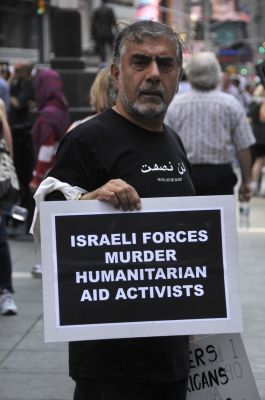 The protest was organized hastily through word of mouth and the Internet as news of the Israeli attack came in late last night.  Another New York protest outside the Israeli Consulate has been called for tomorrow, Tuesday, June 1 at 5:00 PM.

“The attack on that flotilla was just an outrage, and I’m here both as a Jew and as a candidate for office to say this was an outrage and the United States has to condemn this in no uncertain terms,” said Jonathan Tasini, a Democrat running for the 15th Congressional district in New York, a seat currently held by self-described “unwavering supporter of Israel” Charlie Rangel.  “It’s time to stop what has frankly been a one-sided policy towards the Middle East, and really, the United States shares part of the blame for what happened yesterday.”  Tasini lived in Israel for 7 years of his life.

The protest in New York City was held while similar actions were held around the world.  Activists gathered outside the White House in Washington, D.C., while protesters in Paris, Greece and Istanbul clashed with police.  Left-wing Israelis held actions at the Ashdod port, which is where the six boats part of the flotilla were docked after the raid, and in Tel Aviv.  In the occupied Palestinian territories, clashes broke out between Palestinians, internationals and Israeli forces, and a U.S. journalist was injured in her left eye by a sound bomb.

“Now the world is going to know what exactly is happening to the people of Gaza,” said Fida Qishta, a Palestinian from Rafah in Gaza and a journalist.  “If this has happened to the internationals, what about the people who live there?”

Since 2006, Israel and Egypt have imposed a crippling blockade on the Gaza Strip.  According to a recent Amnesty International report, the blockade of Gaza has caused “Mass unemployment, extreme poverty, food insecurity and food price rises caused by shortages [that has] left four out of five Gazans dependent on humanitarian aid. The scope of the blockade and statements made by Israeli officials about its purpose showed that it was being imposed as a form of collective punishment of Gazans, a flagrant violation of international law.” 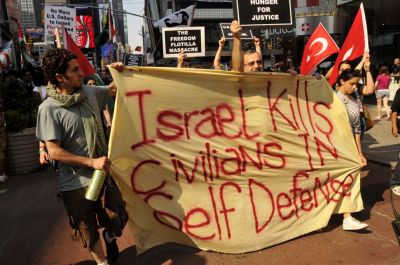 The 2008-09 Israeli assault on the Gaza Strip caused widespread destruction to Gaza’s civilian infrastructure and killed hundreds of civilians, including over 300 children.

Diplomatically, Israel has been condemned by a wide range of actors.  The U.N. Security Council, in an emergency session called by Turkey, called on Israel to lift its blockade of Gaza.  Britain called the attack “deplorable,” while Turkey said it was “inhuman state terror.”

But the Obama administration has stayed largely silent, and has only said, in a statement from the press office, that “The President expressed deep regret at the loss of life in today’s incident…The President also expressed the importance of learning all the facts and circumstances around this morning’s tragic events as soon as possible.”

“The Obama administration, like administrations before, have been on the wrong side of history,” said Remi Kanazi, a Palestinian-American poet and the editor of the book Poets for Palestine.  “No matter how much Israel suppresses the Palestinian people, curbs their voice, bombs Gaza, history is still on the side of humanity.” 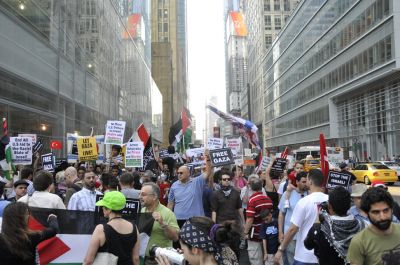 Many of those on the boats remain in Israeli prison, and the names and nationalities of those killed or injured have not been released by Israel.  Israel claims that the killing of activists was in “self-defense” after those on the boat attacked Israeli forces.

“This is in a long line of escalating actions Israel has taken in terms of attacking all kinds of human rights workers, nonviolent resisters, and humanitarian aid workers,” said Rebecca Vilkomerson, the national director of Jewish Voice for Peace.  “There’s absolutely no defense for this action.” 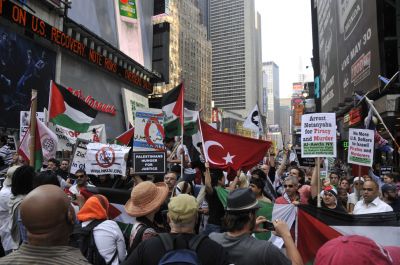 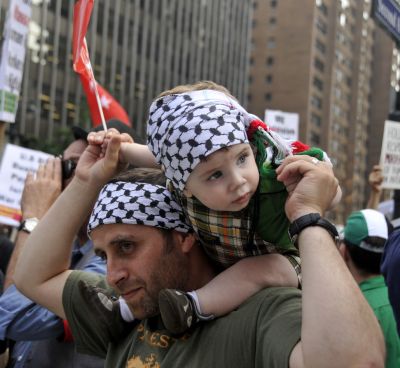